Rayo Vallecano are the guests at Estadio San Mamés on Tuesday for the La Liga game with home team Athletic Bilbao.

Scroll down to see all of the predictions, poll and statistics for Athletic Bilbao v Rayo Vallecano - as well as up-to-date odds.

Their latest results show that there has been much resilience in the Athletic Bilbao defence. Athletic Bilbao have been stingy, seeing the total number of goals that have gone past their goalkeeper during their last 6 outings standing at 3.

Rayo Vallecano will go into this encounter after a 3-0 La Liga win as they beat Getafe in their last match.

A tendency of at least one side getting a clean sheet in games involving Rayo Vallecano has become fairly consistent in recent matches. Looking at their last 6 meetings reveals that this has happened 5 times. During those clashes, opposing sides have hit a goal aggregate of 5 while Rayo Vallecano have scored 10. That trend won’t necessarily be sustained into this next game, of course.

Their prior results show that Rayo Vallecano:

A look at their most recent head to head meetings going back to 24/09/2014 shows that Athletic Bilbao have won 4 of them and Rayo Vallecano 1, with the number of drawn games being 1.

A sum of 15 goals were scored between them during those clashes, with 10 of them from Los Leones and 5 being from Franjirrojos. That is an average goals per game value of 2.5.

The previous league match featuring the two was La Liga match day 32 on 14/04/2019 when the final score was Athletic Bilbao 3-2 Rayo Vallecano.

Owing to a fully injury-free group to choose from, the Rayo Vallecano boss Andoni Iraola has no fitness worries to speak of ahead of this clash.

We envisage that Rayo Vallecano will likely be able to find the back of the net against this Athletic Bilbao team, however it realistically won’t prevent them from conceding a couple at the other end.

We reckon that it will be a narrow 2-1 advantage for Athletic Bilbao by the time that the referee blows the final whistle. It will be interesting to see how this one goes. 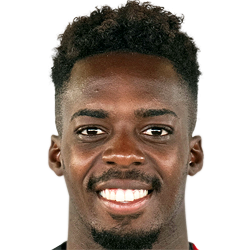 Typically played in the Right Wing position, Iñaki Williams was born in Bilbao, Spain. After having made a senior debut playing for Athletic Bilbao in the 2014 - 2015 season, the goalscoring Forward has bagged 2 league goals in this LaLiga 2021 - 2022 season to date from a total of 5 appearances.

We have made these Athletic Bilbao v Rayo Vallecano predictions for this match preview with the best intentions, but no profits are guaranteed. Please always gamble responsibly, only with money that you can afford to lose.