Full predictions, pre-match stats and user poll for Atlético San Luis v León are shown on this page - as well as up-to-date odds.

Atlético San Luis will be hoping to bounce back here following the 1-2 Liga MX (Apertura) loss in their previous game against Monterrey.

It has been a rare occasion in recent times where Atlético San Luis have shown defensive steel. It will be a concern for them that Rojiblancos have been scored against in 6 of their previous 6 games, giving up 14 goals along the way.

León will go into this game following a 2-0 Liga MX (Apertura) win in the defeat of Universidad Nacional in their last match.

A run of steadfast performances by the León defenders has seen their ‘goals against’ tally amounting to 4 from their previous 6 outings in total. During the same time, the number of goals that they have scored themselves is 10. That kind of pattern won’t necessarily be sustained into this next game, however.

Coming into this meeting, León haven't been defeated in their previous 4 league matches away from home.

The last league match between these clubs was Liga MX (Clausura) match day 6 on 15/02/2020 which ended up with the score at Atlético San Luis 3-1 León.

For their opponents, León got 7 attempts on goal with 3 on target. Leonardo Ramos (27') was the scorer.

Atlético San Luis manager Guillermo Vázquez has no fitness worries whatsoever coming into this match thanks to a completely injury-free group available for selection.

Due to a fully healthy group to pick from, León manager Ignacio Ambriz doesn’t have any fitness concerns to report coming into this game.

We feel that over the course of the game, Atlético San Luis may find it difficult to break down this León outfit who we reckon should score & stay on top.

We’re therefore anticipating a very competitive game with a 0-1 winning score for León after 90 minutes.

Over/Under 2.5 Goals Prediction for Atlético San Luis vs León
Under 2.5 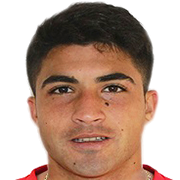 Mostly deployed in the Striker position, Nicolás Ibáñez was born in Venado Tuerto, Argentina. After having made a senior debut playing for Gimna ' Plata in the 2016 - 2017 season, the dangerous Forward has accumulated 5 league goals in this Liga MX (Clausura) 2019 - 2020 campaign so far from a total of 10 appearances.

While we have made these predictions for Atlético San Luis v León for this match preview with the best of intentions, no profits are guaranteed. Always gamble responsibly, and with what you can afford to lose.

⚽️ Where can I get the odds for other Liga MX (Apertura) matches?

Look at all of our upcoming (and previous) Liga MX (Apertura) predictions & previews here.