Our Barrow v Carlisle United predictions, statistics and match poll can be seen below - plus the latest match odds.

Barrow go into this match following on from a 1-1 League Two drawn result versus Colchester United.

The only scorer from Barrow was Tom Beadling (88'). Callum Harriott (33') was the scorer for Colchester United.

It’s been a rare occasion in recent games where Barrow have managed to hold out for a full 90 minutes. The facts show that The Bluebirds have failed to prevent opponents from scoring in 5 of their previous 6 games, giving up 7 goals along the way.

Carlisle United will go into the meeting after a 2-0 League Two win over Scunthorpe United in their previous outing.

During their six previous matches, Chris Beech's Carlisle United have turned their attacks into goals 8 times - yielding them a goals per game average of 1.33.

The previous league fixture between these sides was League Two match day 4 on 03/10/2020 when it ended Carlisle United 1-0 Barrow.

It’s a low absenteeism rate, with just a single fitness concern for the Barrow gaffer Rob Kelly to be concerned with thanks to an almost full-strength group of players. Bobby Burns (Fractured Leg) is sidelined.

Owing to a fully healthy squad available to select from, Carlisle United boss Chris Beech has zero fitness worries at all before this match.

Barrow might have a difficult job to score against this Carlisle United team who we think might win and very possibly keep a clean sheet.

We’re therefore anticipating a hard-fought contest, finishing with a 0-1 victory for Carlisle United at the end of this game. 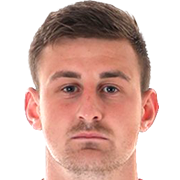 Usually taking to the field in the Striker position, Scott Quigley was born in Shrewsbury, England. After having played his first senior match for Blackpool in the 2017 - 2018 season, the skilful Forward has hit 10 league goals in this League Two 2020 - 2021 season so far in 29 appearances.

We have made these Barrow v Carlisle United predictions for this match preview with the best intentions, but no profits are guaranteed. Please always gamble responsibly, only with money that you can afford to lose.