Return to this page a few days before the scheduled game when this expired prediction will be updated with our full preview and tips for the next match between these teams.
Full-Time Result Prediction
👉
Warta Poznań to Win

All of our predictions, stats and the user poll for Warta Poznań v BBT Nieciecza are shown below (plus the best game odds).

Warta Poznań prepare for this match following a 1-1 Ekstraklasa draw vs Jagiellonia Białystok.

Following on from tasting defeat last time out to Cracovia in Ekstraklasa action, BBT Nieciecza will be hoping to turn things around here.

In that match, BBT Nieciecza had 61% possession and 8 shots at goal with 6 on target. The only player on the scoresheet for BBT Nieciecza was Patryk Czarnowski (79'). At the other end, Cracovia had 7 attempts on goal with 2 of them on target. Pelle van Amersfoort (56', 67') was the scorer for Cracovia.

Looking at their form, and BBT Nieciecza have been scored against in 6 of their last 6 matches, with opponents netting 13 goals overall. In defence, BBT Nieciecza have not been doing too well. Previous results aside, we’ll just have to find out whether that trend shall be sustained here in this match.

The Warta Poznań manager Piotr Tworek will be happy not to have any fitness worries whatsoever before this match owing to a fully healthy squad available for selection.

With a completely injury-free group available for selection, the BBT Nieciecza boss Mariusz Lewandowski has no fitness worries to speak of ahead of this match.

We’ve got the feeling that BBT Nieciecza will have their work cut out to find the net against this Warta Poznań side who will likely get the vital goal that wins it.

We therefore see a good tussle with a 1-0 winning score for Warta Poznań at the end of the match. 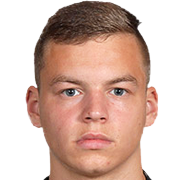 Customarily taking up the Centre Midfield position, Milan Corryn was born in Belgium. After having made a senior debut playing for AS Trenčín in the 2018 - 2019 season, the talented Midfielder has struck 2 league goals in the Ekstraklasa 2021 - 2022 campaign to date from a total of 6 appearances.

While we have made these predictions for Warta Poznań v BBT Nieciecza for this match preview with the best of intentions, no profits are guaranteed. Always gamble responsibly, and with what you can afford to lose. Best of luck.