The Serie B clash at Stadio Ciro Vigorito on Saturday will see home side Benevento welcome Genoa.

All of our predictions, stats and the user poll for Benevento v Genoa are shown below (inc. the best betting odds).

Benevento will be hoping to bounce back here after a 0-1 Serie B loss in their previous game against Genoa.

In that match, Benevento had 41% possession and 5 attempts on goal with 0 on target. On the other side, Genoa had 7 shots at goal with 1 on target. Massimo Coda (12') was the scorer for Genoa.

Under three goals per match were scored during 6 of the past 6 meetings where Benevento have been participants. Regarding the goal attribution during this period, their opponents scored a total of 5 while Benevento managed a tally of 4.

Analysis of their past results shows that Benevento:

The trend of at least one team not scoring a goal in games involving Genoa has become apparent of late. Looking at their last 6 outings reveals that it’s happened 5 times. During these clashes, their opponents have managed a goal aggregate of 2 while Genoa have scored 6. Putting that to one side, it remains to be seen whether that pattern shall persist in this match or not.

Heading into this contest, Genoa are unbeaten in their last 2 league matches away from home.

If we look at their past head to head duels going back to 23/12/2017, there is nothing to separate the two clubs with Benevento winning 2 of those games, Genoa 2 and 2 being drawn in regulation time.

A combined sum of 13 goals were scored between them in this period, with 7 for Benevento and 6 belonging to Il Grifone. The average goals per game has been 2.17.

The previous league clash featuring these clubs was Serie B match day 2 on 20/08/2022 which ended up with the score at Genoa 0-0 Benevento.

On that occasion, Genoa had 64% possession and 13 shots at goal with 5 on target.

On the other side, Benevento had 7 attempts on goal with 1 of them on target.

The referee was Ivano Pezzuto.

The Benevento manager Fabio Cannavaro has zero fitness worries at all coming into this game with a completely healthy squad to pick from.

Genoa boss Alberto Gilardino has to choose from a squad that has some fitness concerns. Marko Pajac (Knee Surgery) and Caleb Ekuban (Achilles tendon surgery) are those who can’t be considered.

We’ve got the feeling that Benevento will need to apply a lot of pressure to hit the back of the net against this Genoa team who we think will end up scoring and possibly keep a clean sheet as well.

We’re therefore seeing a very even contest with a 0-1 victory for Genoa at the end of this game. 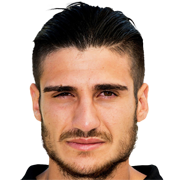 Normally taking to the field in the Centre Midfield position, Gennaro Acampora was born in Naples, Italy. After making a first senior appearance for Spezia in the 2014 - 2015 season, the accomplished Midfielder has netted 2 league goals in the Serie B 2022 - 2023 season so far coming from a total of 14 appearances.

While we have made these predictions for Benevento v Genoa for this match preview with the best of intentions, no profits are guaranteed. Always gamble responsibly, and with what you can afford to lose. Best of luck with your selections.