This Blackpool v Huddersfield Town live stream video is set for 06/02/2023. Football fans can watch this game on a live streaming service if this match is featured in the schedule mentioned above. Here we arm you with helpful information for watching this Championship game including the most recent guide to form, h2h meetings and our match tips.

To watch the game via alternative ways, search for TV channel listings for your local region. Such broadcasting deals are typically allocated on a per-competition/league or even per-fixture basis. For fixtures shown live on regional television programmes, check the listings on the likes of BT Sport, Amazon Prime Video, Sky Sports, Now TV, iTV, Canal+, Fox Soccer, ESPN that are relevant for your location.

When the abovementioned broadcaster indicates that they have the Blackpool v Huddersfield Town soccer live streaming coverage, you’ll be able to see it on your mobile (iPhone, Android including Xiaomi) and computer or tablet (eg iPad, Acer ACTAB).

Post-game, we may also provide a link to game highlights from time to time. We are not responsible for transmitting any match video content linked to from here. All legal complaints must be dealt with via the hosters/owners of said content.

The Championship tie at Bloomfield Road on Tuesday sees home side Blackpool fighting it out with Huddersfield.

Blackpool will be hoping to return to winning ways here after the 3-0 Championship defeat in their last game at the hands of Middlesbrough.

It has been all too rare in recent games where Blackpool have managed to hold out for a full 90 minutes. The reality is that Blackpool have seen their defence breached in 6 of their previous 6 matches, shipping 11 goals on the way.

Heading into this contest, Blackpool are without a win at home for the past 5 league matches. Their supporters are understandably frustrated.

Last time out, Huddersfield drew 1-1 in the Championship match with Queens Park Rangers.

The stats tell the story, and Huddersfield have been scored against in 5 of their last 6 games, letting opponents get 9 goals in total. Defensively, Huddersfield Town have not been doing too well. Putting that to one side, it remains to be seen whether the trend might be sustained in this match or not.

Their prior results show that Huddersfield Town:

A review of their most recent head to head meetings going back to 22/03/2014 shows us that Blackpool have won 2 of these games & Huddersfield 3, with the tally of drawn results standing at 1.

A total of 16 goals were yielded between them in this period, with 6 of them from The Seasiders and 10 netted by The Terriers. That’s an average goals per game figure of 2.67.

The last league clash featuring the two was Championship match day 8 on 04/09/2022 which ended up with the score at Huddersfield Town 0-1 Blackpool.

That time, Huddersfield Town managed 64% possession and 15 shots on goal with 6 on target.

On the other side, Blackpool got 7 attempts on goal with 2 of them on target. Theo Corbeanu (38') was the scorer.

Huddersfield boss Mark Fotheringham has to contend with a number of unavailable players. Lee Nicholls (Shoulder Injury) and Yuta Nakayama (Achilles tendon rupture) are not able to play.

Our thinking is that Huddersfield Town are likely to breach the defence of this Blackpool outfit, although it probably shouldn’t be as many as the goals that they could concede.

Our selection here is for a very close game with a 2-1 winning margin for Blackpool at full-time. Could easily see this go either way. 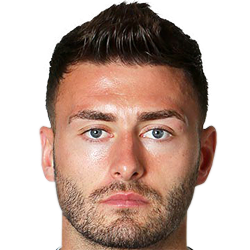 Typically taking up the Striker position, Gary Madine was born in Gateshead, England. Having made his senior debut playing for Carlisle United in the 2007 - 2008 season, the goalscoring Forward has managed 4 league goals in the Championship 2022 - 2023 campaign to date coming from a total of 22 appearances.

We have made these Blackpool v Huddersfield Town predictions for this match preview with the best intentions, but no profits are guaranteed. Please always gamble responsibly, only with money that you can afford to lose. Good luck if you do place a bet today.

⚽️ Where can I find the previews for other Championship games?

You can see all of the upcoming (and previous) Championship predictions & previews here.