Borussia Dortmund II will be at GGZ-Arena on Saturday for the 3rd Liga clash with home side Zwickau.

All Zwickau v Borussia Dortmund II game predictions, stats and user poll are shown below - plus the latest match odds.

Zwickau will be looking for another win after a 1-0 3rd Liga triumph against Borussia Dortmund II.

The only name on the scoresheet from Zwickau was Max Jansen (9').

A recurring characteristic of recent Zwickau games is seeing a zero in the scoreline.

From their previous sextet of clashes leading up to this one, in as many as 6 of them a wager on BTTS would've been a loser.

Coming into this fixture, Zwickau haven't been defeated in their previous 2 home league matches.

The forward players for Borussia Dortmund II have been starved of goals over their last six encounters, contributing the disappointing return of only 3. In those fixtures, Die Borussen have also seen the overall goal tally of their opponents equal 10. That kind of trend might not be sustained into this next game, though.

The last league clash featuring these sides was 3rd Liga match day 20 on 18/12/2021 when it finished Borussia Dortmund II 3-1 Zwickau.

Our assessment is that Borussia Dortmund II should get enough chances to find the net against this Zwickau side, however that might not be as many as they will have scored against them.

We’re going for both teams to score in a 2-1 victory for Zwickau at full-time. It really should be an interesting one. 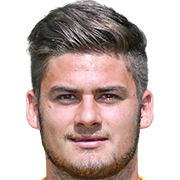 Generally played in the Striker position, Dominik Baumann was born in Germany. Having made a first senior appearance for Dynamo Dresden in the 2014 - 2015 season, the dangerous Forward has managed 2 league goals in the 3. Liga 2022 - 2023 season so far from a total of 6 appearances.

We have made these Zwickau v Borussia Dortmund II predictions for this match preview with the best intentions, but no profits are guaranteed. Please always gamble responsibly, only with money that you can afford to lose. Best of luck.