All Borussia Dortmund v Sporting Lisbon match predictions, user poll and stats are shown below - plus the latest betting odds.

Borussia Dortmund will be hoping for a better result after the 1-0 Bundesliga 1 defeat last time out to Borussia Mönchengladbach.

Sporting Lisbon go into this game following a 1-0 Primeira Liga win over Marítimo in their last fixture.

For 5 of the past 6 clashes featuring Sporting Lisbon, a relatively low number of goals have been struck between them and their opposition. The overall average goals scored per game in that spell is a paltry 2.33, with the number of goals averaged by Sportinguistas being 1.17.

Sporting Lisbon boss Rúben Amorim has not got a full squad to pick from. Gonçalo Inácio (Unknown Injury) and Pedro Gonçalves (Foot Injury) are those who can’t be considered.

We’ve got the feeling that Sporting Lisbon are certainly able to get a goal against this Borussia Dortmund side, although that realistically won’t prevent them from conceding a couple at the other end.

We’re tipping a narrow 2-1 win for Borussia Dortmund at full-time. It really should be an interesting one. 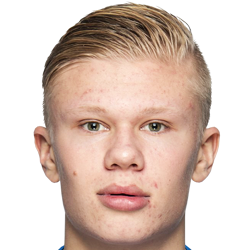 Mostly used in the Striker position, Erling Haaland was born in Leeds, England. After having made a senior debut playing for Molde FK in the 2017 season, the dangerous Forward has accumulated 7 league goals in the Bundesliga 2021 - 2022 season so far in a total of 5 appearances.

While we have made these predictions for Borussia Dortmund v Sporting Lisbon for this match preview with the best of intentions, no profits are guaranteed. Always gamble responsibly, and with what you can afford to lose.