Return to this page a few days before the scheduled game when this expired prediction will be updated with our full preview and tips for the next match between these teams.
Full-Time Result Prediction
👉
Botafogo to Win

View all Botafogo v Coritiba tips, stats and our pre-match poll below - plus the latest betting odds.

Botafogo will play in this match after a 0-0 Serie A draw against América Mineiro.

In their prior six fixtures, Luís Castro's Botafogo have scored a total of 6 times - an average number of goals per match equal to 1.

Going into this contest, Botafogo haven’t won at home in the past 4 league games. Their supporters are understandably frustrated.

Coritiba will go into the encounter following a 2-0 Serie A win with the eclipse of Atlético Goianiense in their last fixture.

Throughout their six previous matches, Guto Ferreira's Coritiba have converted a total of 6 times therefore yielding them a goals scored per game average of 1.

Going into this game, the form guide shows that Coritiba:

Inspecting their prior head-to-head clashes dating back to 24/09/2017 shows that Botafogo have won 4 of these and Coritiba 1, with the number of drawn results being 1.

12 goals were shared by the two clubs in these games, with 8 of them for Fogão and 4 netted by Coxa. The average goals per game has been 2.

The last league encounter between these clubs was Serie A match day 8 on 29/05/2022 when the final score was Coritiba 1-0 Botafogo.

In that match, Coritiba managed 28% possession and 15 attempts at goal with 5 on target. Their only player to score was Igor Paixão (29').

Botafogo had 18 attempts at goal with 3 of them on target.

Out of a mainly available squad, there is just the sole fitness issue for the Coritiba boss Guto Ferreira to be concerned about. Neílton (Arthroscopie) won’t be playing here.

In our opinion, Coritiba might well have a job on their hands to be putting a goal past this Botafogo team who we think will score & stay on top.

With that in mind, we reckon that it will be a good battle with a 1-0 advantage for Botafogo when all is said and done. 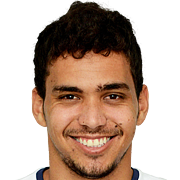 Regularly deployed in the Central Attacking Midfielder position, Carlos Eduardo was born in Ribeirão Preto, Brazil. Having played his first senior match for Fluminense in the 2009 season, the gifted Midfielder has scored a sum of 2 league goals in the Série A 2022 campaign so far coming from a total of 8 appearances.

While we have made these predictions for Botafogo v Coritiba for this match preview with the best of intentions, no profits are guaranteed. Always gamble responsibly, and with what you can afford to lose.