The First League meeting at Stadion Hristo Botev on Sunday will see home side Botev Vratsa up against opponents in Lokomotiv Sofia.

For all of our match predictions, pre-game poll and statistics for Botev Vratsa v Lokomotiv Sofia, scroll down - plus the latest betting odds.

Botev Vratsa will be hoping to bounce back here after the 0-1 First League defeat last time out to Pirin.

It has not been often in recent times where Botev Vratsa have shown defensive steel. It will be a concern for them that Botev Vratsa have failed to prevent opponents from scoring in 6 of their previous 6 games, giving up 12 goals in the process.

Coming into this contest, Botev Vratsa have left without a victory over Lokomotiv Sofia in their last 5 matches in the league.

In their last fixture, Lokomotiv Sofia drew 0-0 in the First League tie with Tsarsko Selo.

In that match, Lokomotiv Sofia managed 58% possession and 9 attempts at goal with 2 on target. For their opponents, Tsarsko Selo had 7 shots on goal with 1 of them on target.

The forward players for Lokomotiv Sofia have suffered from a shortage of goals over their last six games, contributing the disappointing return of just 4. In those matches, The Railwaymen have also seen the overall goal aggregate against them equal 6. Even so, we will just have to wait and see if that pattern will be sustained in this next match or not.

A look at their previous results shows us that Lokomotiv Sofia:

A review of their prior head to head clashes going back to 17/04/2012 tells us that Botev Vratsa have won 1 of these & Lokomotiv Sofia 3, with the number of draws standing at 2.

A total of 11 goals were scored between them in this period, with 4 for Vratsa and 7 coming from The Railwaymen. That’s an average goals per game figure of 1.83.

In that match, Lokomotiv Sofia had 60% possession and 9 shots on goal with 6 on target. The scorer was Celso Raposo (33').

Botev Vratsa got 6 attempts on goal with 2 of them on target.

The referee was Valentin Zhelezov.

Regarding absentees, there’s just the lone fitness concern for the Botev Vratsa boss Ivaylo Dimitrov to be concerned about from of an almost fully healthy group of players. Miroslav Marinov (Ankle Injury) misses out.

Thanks to a completely healthy group to choose from, the Lokomotiv Sofia manager Ivan Kolev has no fitness concerns to report before this game.

We’re thinking that Lokomotiv Sofia and Botev Vratsa may well both score, with little between these two teams.

It could well end in a draw. We’re therefore anticipating a 1-1 score draw at the end of this one. 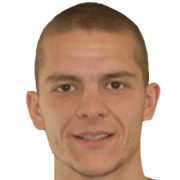 Customarily playing in the Right Attacking Midfielder position, Yuliyan Nenov was born in Bulgaria. After having made a senior debut playing for CSKA Sofia in the 2012 - 2013 season, the accomplished Midfielder has scored a sum of 3 league goals in the First League 2021 - 2022 season so far coming from a total of 25 appearances.

We have made these Botev Vratsa v Lokomotiv Sofia predictions for this match preview with the best intentions, but no profits are guaranteed. Please always gamble responsibly, only with money that you can afford to lose. We wish you the best of luck.