Bradford City will do battle with visiting team Leyton Orient at Utilita Energy Stadium in the League Two tie on Tuesday.

Our full set of predictions, statistics and match poll for Bradford City v Leyton Orient can be seen below - as well as up-to-date odds.

Bradford City will be looking for another win after a 0-2 League Two triumph vs Cheltenham Town.

Over their last 6 games, Conor Sellars's Bradford City have hit the target a total of 11 times, an average number of goals scored per match equal to 1.83.

Going into this game, the form guide shows that Bradford City:

In their previous game, Leyton Orient drew 1-1 in the League Two tie with Port Vale.

The only player to score from Leyton Orient was Daniel Kemp (63'). David Worrall (47') was the scorer for Port Vale.

It is worth noting that Leyton Orient have struggled for goals in their past six games, contributing the disappointing return of just 3. In those fixtures, The O's have also seen the overall goal tally of opposing teams equal 4.

Inspecting their past head-to-head clashes stretching back to 14/12/2013 shows that Bradford City have won 3 of them & Leyton Orient 1, with the number of drawn results being 2.

A combined sum of 10 goals were scored between them throughout the course of those matches, with 7 for The Bantams and 3 belonging to The O's. The average goals per game has been 1.67.

The previous league contest between the two was League Two match day 14 on 24/11/2020 when it ended Leyton Orient 1-0 Bradford City.

Bradford City boss Conor Sellars does not have any fitness concerns whatsoever before this clash thanks to a completely injury-free squad available to choose from.

Due to a completely healthy squad to choose from, Leyton Orient manager Ross Embleton does not have any fitness worries to speak of coming into this game.

Our thinking is that Leyton Orient will need to apply a lot of pressure to put one past this Bradford City lineup who we think will likely be able to get on the scoresheet themselves in a winning performance.

We’re therefore expecting a hard-fought contest, finishing with a 1-0 win for Bradford City at the conclusion of the game. 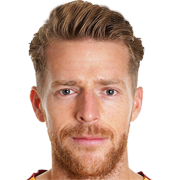 Mostly taking up the Striker position, Billy Clarke was born in Cork, Rep. Ireland. Having made his senior debut playing for Colchester United in the 2005 - 2006 season, the skilful Forward has managed to score 2 league goals in the League Two 2020 - 2021 campaign to date in 17 appearances.

While we have made these predictions for Bradford City v Leyton Orient for this match preview with the best of intentions, no profits are guaranteed. Always gamble responsibly, and with what you can afford to lose. Good luck!