Scroll down for all of our predictions, poll and stats for the Forest Green Rovers v Cheltenham Town game (including the best match odds).

Forest Green Rovers go into this fixture following on from a 1-1 League One draw against Oxford United.

For Forest Green Rovers, goals were scored by Harry Boyes (19' Own goal) and Jamille Matt (60').

Cheltenham Town will go into this meeting following a 1-0 League One win to beat Wycombe Wanderers in their last outing.

The only name on the scoresheet from Cheltenham Town was Alfie May (26').

A series of hard-working displays from the Cheltenham Town defensive unit has resulted in the number of goals they’ve conceded standing at 4 from their last 6 outings overall. In that period, their own attack force has managed to score 4. Previous results aside, we’ll just have to find out if such a trend will be sustained in this game.

Looking at their prior head-to-head clashes going back to 04/09/2018 shows that Forest Green Rovers have won 2 of these and Cheltenham Town 1, with the tally of drawn games standing at 3.

A combined sum of 16 goals were shared by the two clubs during those clashes, with 10 for The Green Devils and 6 being from The Robins. That is an average goals per game value of 2.67.

The previous league clash between these clubs was League Two match day 27 on 30/01/2021 when it finished Forest Green Rovers 0-0 Cheltenham Town.

The referee was Ollie Yates.

The Forest Green Rovers manager Ian Burchnall will be grateful to have no fitness concerns at all ahead of this clash owing to a fully injury-free group available for selection.

With a completely injury-free squad available for selection, the Cheltenham Town manager Wade Elliott does not have any fitness worries to report ahead of this clash.

Looking at these two, we feel that Cheltenham Town and Forest Green Rovers should both get enough opportunities to score, although it’s hard to separate the two.

A close call, and we think a draw is quite likely. That’s why our selection here is for a tight encounter with a score draw at the conclusion of the game. 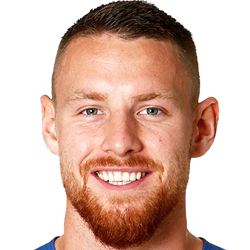 Mostly taking up the Striker position, Connor Wickham was born in Hereford, England. Having made a first senior appearance for Ipswich Town in the 2008 - 2009 season, the talented Forward has got 5 league goals in the League One 2022 - 2023 season to date in a total of 13 appearances.

While we have made these predictions for Forest Green Rovers v Cheltenham Town for this match preview with the best of intentions, no profits are guaranteed. Always gamble responsibly, and with what you can afford to lose. Good luck!