Cliftonville will be at The Oval on Sunday for the Premiership game with home team Glentoran.

For all of our match predictions, pre-game poll and statistics for Glentoran v Cliftonville, scroll down - as well as up-to-date odds.

Glentoran go into this game coming off the back of a 0-0 Premiership stalemate vs Coleraine.

Their most recent results shine a light on the fact that it has been a great time for the Glentoran rearguard. Glentoran have given the opposition little, seeing the total number of goals that have flown into the back of their net over the course of their past six games standing at 3. Historical results aside, we will just have to wait and see if such a trend will continue on in this upcoming game.

Cliftonville will go into the encounter following a 0-2 Premiership win to beat Dungannon Swifts in their last game.

The only player to score from Cliftonville was Ryan Curran (23', 66').

Throughout their six most recent matches, Paddy McLaughlin's Cliftonville have found the net 9 times therefore giving them the goals per game average of 1.5.

Going into this game, the form guide shows that Cliftonville:

A look at their past head to head clashes stretching back to 20/04/2021 shows that Glentoran have won 2 of these and Cliftonville 4, with the number of drawn results standing at 0.

A combined sum of 12 goals were yielded between them during those clashes, with 5 for The Glens and 7 being from The Reds. That is an average goals per game value of 2.

The previous league contest between these clubs was Premiership match day 2 on 30/04/2022 and the score finished Glentoran 1-2 Cliftonville.

The match was refereed by Raymond Crangle.

There’s just one fitness concern for the Glentoran boss Mick McDermott to contend with from a near full-strength set of players. Conor McMenamin (Fibula Fracture) misses out.

Thanks to a fully healthy squad to pick from, the Cliftonville boss Paddy McLaughlin has no fitness concerns to report coming into this clash.

We believe that Cliftonville would be disappointed if they were not to score a goal against this Glentoran outfit, although that realistically won’t prevent them from conceding a couple at the other end.

We’re expecting both teams to score in a 2-1 victory for Glentoran by the time that the referee blows the final whistle. Should be an interesting one. 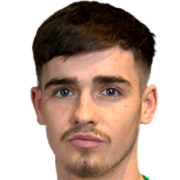 Customarily taking up the Striker position, Jay Donnelly was born in N. Ireland. After having played his first senior match for Cliftonville in the 2014 - 2015 season, the accomplished Forward has managed to score 4 league goals in this Premiership 2022 - 2023 campaign to date in a total of 12 appearances.

We have made these Glentoran v Cliftonville predictions for this match preview with the best intentions, but no profits are guaranteed. Please always gamble responsibly, only with money that you can afford to lose. Good luck with your selections.