The First League tie at Stadion Slavia on Friday will see home side Slavia Sofia ready themselves for the visit of CSKA 1948.

View all of the Slavia Sofia v CSKA 1948 predictions, poll and stats below (including the best match odds).

Slavia Sofia will be hoping for a better result after a 1-0 First League defeat last time out to Levski Sofia.

It has been all too rare in recent times that Slavia Sofia have shown defensive steel. It will be a concern for them that The White Avalanche have seen their defence breached in 6 of their previous 6 games, letting in 8 goals in the process.

Coming into this fixture, Slavia Sofia are unbeaten in their last 2 league matches at home.

CSKA 1948 come into this clash following on from a 1-0 First League win with the eclipse of Botev Vratsa in their previous game.

Krasimir Balakov's CSKA 1948 have converted 6 times throughout their latest 6 matches. The overall goals that they have conceded during that period adds up to 8.

Going into this encounter, CSKA 1948 haven’t won away from home in the past 6 league matches.

The previous league game featuring these sides was First League match day 10 on 25/10/2020 which finished with the scoreline of CSKA 1948 5-1 Slavia Sofia.

Slavia Sofia boss Aleksandr Tarkhanov doesn’t have any fitness worries at all ahead of this match owing to a fully healthy group available to select from.

Owing to a completely injury-free squad ready to go, CSKA 1948 manager Krasimir Balakov does not have any fitness worries to report coming into this clash.

In our opinion, Slavia Sofia might need a bit of good fortune to score goals against this CSKA 1948 side who we think might score & stay on top.

We’re therefore anticipating a very even match with a 0-1 win for CSKA 1948 at the end of the match. 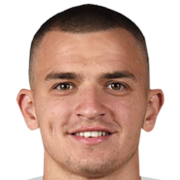 Mostly played in the Striker position, Kaloyan Krastev was born in Sofia, Bulgaria. After making a first senior appearance for Slavia Sofia in the 2015 - 2016 season, the goalscoring Forward has scored a sum of 2 league goals in the First League 2020 - 2021 campaign to date in a total of 21 appearances.

While we have made these predictions for Slavia Sofia v CSKA 1948 for this match preview with the best of intentions, no profits are guaranteed. Always gamble responsibly, and with what you can afford to lose.