All East Fife v Greenock Morton game predictions, stats and user poll are shown below - plus the latest betting odds.

East Fife will be looking for another win after the 1-0 League One victory against Clyde.

The only name on the scoresheet from East Fife was Danny Denholm (4').

In their last 6 fixtures, Darren Young's East Fife have seen rewards for their attempts on goal a total of 8 times resulting in an average number of goals per match equal to 1.33.

After being defeated in their last game at the hands of Raith Rovers in Championship competition, Greenock Morton will be aiming to make amends here.

The stats don’t lie, and Greenock Morton have been scored against in 5 of their last 6 games, conceding 7 goals in all. Defensively, The Ton seem to have a bit of a soft underbelly. We will have to find out if that trend will end up being sustained here.

Looking at the statistics for their head to head duels going back to 19/04/2003, there has been little to separate the clubs with East Fife winning 2 of those games, Greenock Morton 2 and 2 being draws in normal time.

An aggregate of 10 goals were yielded between them in these games, with 5 from The Fife and 5 created by The Ton. That’s an average goals per game figure of 1.67.

East Fife manager Darren Young does not have any fitness concerns to speak of ahead of this clash thanks to a fully injury-free group to pick from.

Thanks to a fully injury-free squad available for selection, Greenock Morton manager Gus MacPherson does not have any fitness worries at all before this clash.

We’re inclined to think that Greenock Morton and East Fife should both be able to find the back of the net at least once here although it’s difficult at this stage to select a clear winner.

A draw looks like a realistic possibility but, again, we don’t expect it to end goalless. With that in mind, we reckon that it will be a very even contest with a 2-2 scoreline when the full-time whistle blows. 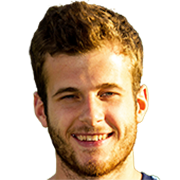 Regularly playing in the Left Attacking Midfielder position, Danny Denholm was born in Edinburgh, Scotland. Having made a first senior appearance for Forfar Athletic in the 2012 - 2013 season, the goalscoring Midfielder has managed to score 3 league goals in the League One 2020 - 2021 campaign to date in 9 appearances.

We have made these East Fife v Greenock Morton predictions for this match preview with the best intentions, but no profits are guaranteed. Please always gamble responsibly, only with money that you can afford to lose. We wish you the best of luck.