All Lugano v Grasshopper Club Zürich game predictions, stats and user poll are shown below - as well as up-to-date odds.

Lugano are hoping to win again after their last result, a 2-3 Super League success over FC Sion.

Matches featuring Lugano have usually been absorbing encounters of late with high scoring being a common characteristic. Over their past six games alone, the sum total of 20 goals have flown in for both sides combined (at an average of 3.33 goals per game) with 12 of these coming from Lugano.

Their previous form shows that Lugano:

After a loss in their previous game against BSC Young Boys in Super League action, Grasshopper Club Zürich will be hoping to turn things around here.

Demonstrating their fondness for eventful encounters, goals have been scored 21 times in the last six matches in which Grasshopper Club Zürich have played, giving an average of 3.5 goals per meeting. Their opponents have got 11 from this total. We will have to see whether or not that trend will be sustained in this game.

Analysis of their past results shows that Grasshopper Club Zürich:

A look at their past head to head meetings stretching back to 25/05/2019 tells us that Lugano have won 2 of them & Grasshopper Club Zürich 1, with the tally of drawn results being 3.

An aggregate of 17 goals were yielded between them in these games, with 9 of them from Lugano and 8 being from GCZ. This gives an average number of goals per game equal to 2.83.

The last league game between the two was Super League match day 2 on 24/07/2022 which ended up with the score at Grasshopper Club Zürich 2-1 Lugano.

That day, Grasshopper Club Zürich had 38% possession and 13 shots on goal with 6 of them on target. Their only player to score was Hayao Kawabe (12', 47').

Our assessment is that Grasshopper Club Zürich would be disappointed if they were not to put a goal past this Lugano lineup, but that realistically won’t be enough to avoid a loss.

We’re tipping a close game with a 2-1 advantage for Lugano when all is said and done. Should be a good one. 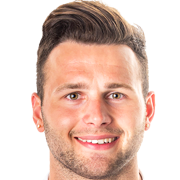 Typically taking to the field in the Left Wing position, Renato Steffen was born in Aarau, Switzerland. After having played his first senior match for FC Thun in the 2012 - 2013 season, the goalscoring Forward has managed 3 league goals in the Super League 2022 - 2023 campaign to date in a total of 11 appearances.

While we have made these predictions for Lugano v Grasshopper Club Zürich for this match preview with the best of intentions, no profits are guaranteed. Always gamble responsibly, and with what you can afford to lose. We wish you the best of luck.