Rodez will take to the pitch with visiting rivals EA Guingamp at Stade Paul-Lignon in this Ligue 2 tie on Saturday.

View all of the Rodez v EA Guingamp predictions, poll and stats below (inc. the best betting odds).

Rodez will play in this fixture coming off the back of a 0-0 Coupe De France tied result against RC Grasse.

In that game, Rodez managed 51% possession and 9 attempts at goal with 3 on target. RC Grasse got 16 shots on goal with 5 of them on target. The game was won 5-4 by Rodez on penalties.

It has not been often in recent games where Rodez have shown defensive steel. The facts show that Rodez have been scored against in 5 of their previous 6 clashes, giving up 8 goals during that time.

Their prior results show that Rodez:

After suffering a loss in their previous game against Grenoble in Ligue 2 action, EA Guingamp and their travelling fans will hope for a better result here.

The numbers tell their own story, and EA Guingamp have been scored against in 6 of their last 6 games, with opponents netting 10 goals in total. In defence, EA Guingamp have not been doing too well. That trend won’t necessarily be sustained here, however.

Looking at the statistics for their head to head meetings going back to 06/03/2020, there is nothing to separate the two clubs with Rodez winning 1 of those games, EA Guingamp 1 and 4 being draws in normal time.

A combined sum of 12 goals were scored between them in this period, with 6 from Rodez and 6 coming from Guingamp. That’s an average goals per game of 2.

The last league meeting featuring these sides was Ligue 2 match day 7 on 04/10/2022 which finished with the scoreline of EA Guingamp 0-0 Rodez.

Regarding absentees, there’s just the sole fitness concern for the Rodez manager Didier Santini to contend with thanks to an otherwise robust set of players. Amiran Sanaia (cancer) will miss out.

Out of a mainly healthy group of players, there is only the sole fitness issue for the EA Guingamp boss Stéphane Dumont to be concerned about. Pierre Lemonnier (Cruciate Ligament Rupture) won’t be in action.

Looking at these two, we feel that EA Guingamp and Rodez could well end up finding themselves level here, with both teams capable of netting.

A draw looks like a realistic possibility, but we’ll see what happens. That’s why we have predicted a very even match with a 1-1 scoreline at the end of the match. 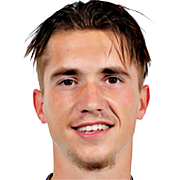 Usually played in the Central Defensive Midfielder position, Bradley Danger was born in Mont-Saint-Aignan, France. After having played his first senior match for Chambly Oise in the 2020 - 2021 season, the goalscoring Midfielder has got 2 league goals in the Ligue 2 2022 - 2023 season to date in a total of 19 appearances.

We have made these Rodez v EA Guingamp predictions for this match preview with the best intentions, but no profits are guaranteed. Please always gamble responsibly, only with money that you can afford to lose. Best of luck.