There is MLS action scheduled for Sunday when Houston Dynamo take on Nashville.

View all of the Houston Dynamo v Nashville predictions, poll and stats below - plus the latest match odds.

Houston Dynamo will want to continue from where they left off last time out with a 1-0 Open Cup triumph versus San Antonio.

Paulo Nagamura's Houston Dynamo have celebrated scoring a sum total of 5 times over their last six outings. The tally of goals that have been scored against them in those fixtures is 7.

Nashville come into this game following a 3-2 Open Cup win with the eclipse of Atlanta United in their previous outing.

Throughout their 6 latest matches, Gary Smith's Nashville have fired home 7 times - earning them a goals per game average of 1.17.

The last league contest featuring the two was MLS match day 18 on 15/10/2020 which finished with the scoreline of Houston Dynamo 1-3 Nashville.

That day, Houston Dynamo managed 63% possession and 18 shots on goal with 6 on target. Their only player on the scoresheet was Darwin Quintero (75').

The Houston Dynamo manager Paulo Nagamura does not have any fitness concerns to speak of coming into this match thanks to a completely injury-free group available for selection.

It looks as if Orange Crush will possibly line up in a 4-2-3-1 system for this game with Steve Clark, Zeca, Tim Parker, Teenage Hadebe, Adam Lundqvist, A. Carrasquilla, Matías Gabriel Vera, Griffin Dorsey, Darwin Quintero, Tyler Pasher and Sebastián Ferreira.

Owing to a completely healthy group to choose from, the Nashville boss Gary Smith does not have any fitness concerns to speak of before this game.

We’ve got the feeling that Nashville and Houston Dynamo should both get enough opportunities to score, although it’s hard to separate the two.

There should be little in it, and a draw looks to be quite a realistic result. With that in mind, we reckon that it will be a 1-1 draw at the end of this game. 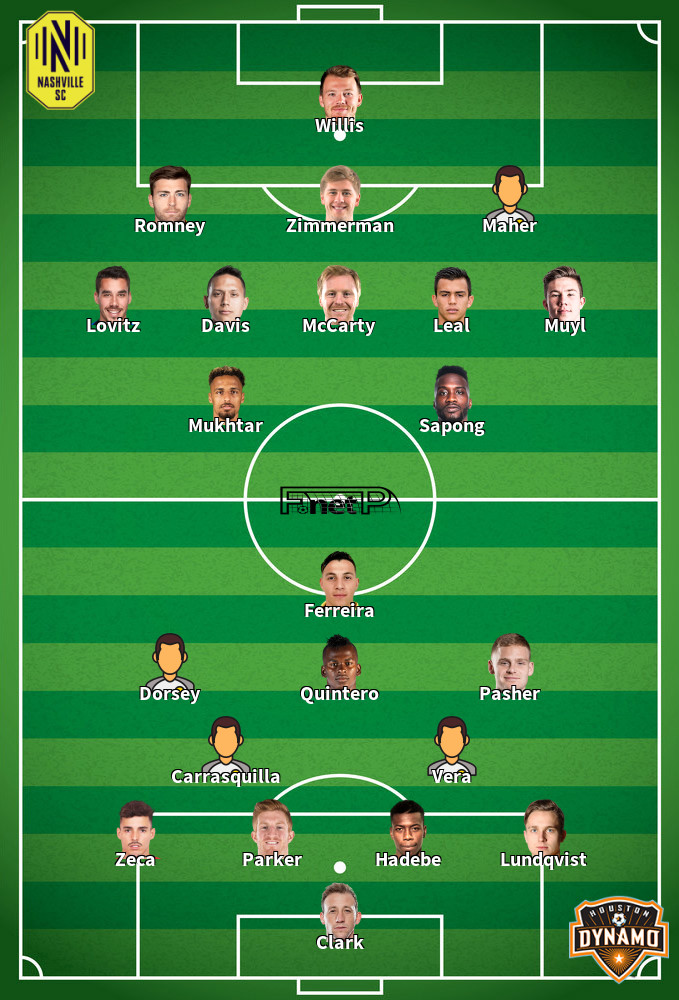 We have made these Houston Dynamo v Nashville predictions for this match preview with the best intentions, but no profits are guaranteed. Please always gamble responsibly, only with money that you can afford to lose. Good luck if you do place a bet today.