This Huracán v Sarmiento live stream video is scheduled to be broadcast on 11/04/2021. Football fans can watch this clash on a live streaming service should the game be featured in the schedule referenced above. Here we give useful info for watching this Copa de la Liga Profesional match including the most recent guide to form, head to head clashes and our match tips.

In order to view this game using alternative ways, check broadcasters’ listings relating to your place of residence. Such broadcasting deals are often allocated on a per-competition/league or even single fixture level. For games shown live on regional tv programmes, check the schedules on channels including BT Sport, Amazon Prime Video, Sky Sports, Now TV, iTV, Canal+, Fox Soccer, ESPN depending on where you are.

When the abovementioned broadcaster does broadcast a Huracán v Sarmiento soccer live streaming coverage, you can see the game on your mobile (iPhone, Android including Samsung Galaxy) and computer or tablet (eg iPad, Huawei MatePad).

After the match finishes, we might also provide a link to highlights from time to time. We aren’t responsible for the transmission of any match video content linked to from this site. All legal issues must be done by contacting the hosters/owners of the content.

Full predictions, pre-match stats and user poll for Huracán v Sarmiento are shown on this page - plus the latest match odds.

Huracán head into this match coming off the back of a 2-2 Copa de la Liga Profesional drawn match against Newell´s Old Boys.

Fewer than three goals per match were recorded in 5 of the past 6 meetings where Huracán have been involved. Regarding the goal distribution in that period, their opponents scored an aggregate of 5 and El Globo / Los Quemeros managed a tally of 6.

After being defeated in their last game at the hands of Atlético Tucumán in Copa de la Liga Profesional competition, Sarmiento and their travelling fans will hope for a better result here.

Looking at their form, and Sarmiento have been scored against in 5 of their last 6 matches, seeing opposing sides hit 11 goals in all. Defensively, Verde can certainly do much better. It will be interesting to see if that trend can be sustained into this next match.

Huracán boss Israel Damonte doesn’t have any fitness concerns at all before this clash owing to a fully healthy group available to select from.

Due to a completely injury-free squad available to select from, Sarmiento manager Mario Sciacqua has no fitness concerns whatsoever ahead of this match.

Our assessment here is that Sarmiento will have a tough ask to break down this Huracán lineup who we think should score & stay on top.

That’s why our selection here is for a very even contest with a 1-0 win for Huracán at the end of the 90. 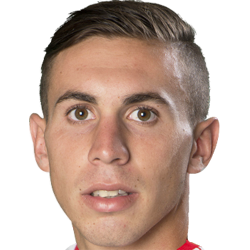 Generally played in the Striker position, Norberto Briasco was born in Buenos Aires, Argentina. Having made a first senior appearance for Huracán in the 2016 - 2017 season, the dangerous Forward has hit 3 league goals in this Superliga 2019 - 2020 season to date coming from a total of 18 appearances.

We have made these Huracán v Sarmiento predictions for this match preview with the best intentions, but no profits are guaranteed. Please always gamble responsibly, only with money that you can afford to lose.

⚽️ Where can I get the previews for other Copa de la Liga Profesional matches?

You can see all of the next (and previous) Copa de la Liga Profesional predictions & previews here.