Return to this page a few days before the scheduled game when this expired prediction will be updated with our full preview and tips for the next match between these teams.
Full-Time Result Prediction
👉
Jagiellonia Białystok to Win

The Ekstraklasa match at Stadion Miejski w Białymstoku on Saturday will see hosts Jagiellonia Białystok facing opposition in the form of Wisła Kraków.

Our Jagiellonia Białystok v Wisła Kraków predictions, statistics and match poll can be seen below (inc. the best betting odds).

Jagiellonia Białystok have been on a persistent run of goalscoring form, hitting the target in one hundred percent of their last 6 matches.

They have managed to rack up 9 during that time and have conceded a total of 10. That kind of pattern won’t necessarily follow through into this next game, however.

Leading up to this clash, Jagiellonia Białystok:

Wisła Kraków go into this match after a 1-0 Ekstraklasa win with the defeat of Cracovia in their most recent fixture.

Over the course of 5 of the previous 6 clashes featuring Wisła Kraków, a notably low volume of goals have been struck between them and opposing teams. The overall average goals scored per game in that spell comes to a paltry 1.83, with the number of goals averaged by Biała Gwiazda equalling 0.33.

Ahead of this meeting, Wisła Kraków haven't beaten Jagiellonia Białystok when having played them away from home in the previous 3 league games.

Checking out their prior head to head duels stretching back to 05/08/2018, both clubs have shared the honours with Jagiellonia Białystok winning 2 of those games, Wisła Kraków 2 and 2 being draws after 90 minutes of play.

An aggregate of 17 goals were scored between them during those clashes, with 7 of them for Jagiellonia and 10 coming from Biała Gwiazda . This gives an average number of goals per game equal to 2.83.

The last league match between these sides was Ekstraklasa match day 16 on 07/02/2021 and the score finished Wisła Kraków 2-0 Jagiellonia Białystok.

The match was refereed by Jarosław Przybył.

The Jagiellonia Białystok manager Ireneusz Mamrot will be grateful not to have any fitness worries whatsoever ahead of this clash thanks to a completely healthy group available to select from.

Thanks to a fully healthy squad available to choose from, the Wisła Kraków manager Adrián Guľa doesn’t have any fitness concerns whatsoever ahead of this match.

Our feeling is that Wisła Kraków are capable enough to get a goal against this Jagiellonia Białystok outfit, although that may not quite be enough to avoid defeat.

We’re going for a 2-1 victory for Jagiellonia Białystok at the end of this one. Should be a good one. 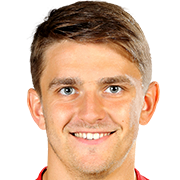 Normally playing in the Left Attacking Midfielder position, Fiodor Černych was born in Moscow, Russia. Having made a first senior appearance for Górnik Leczna in the 2014 - 2015 season, the talented Midfielder has managed 4 league goals in this Ekstraklasa 2021 - 2022 season to date in a total of 11 appearances.

While we have made these predictions for Jagiellonia Białystok v Wisła Kraków for this match preview with the best of intentions, no profits are guaranteed. Always gamble responsibly, and with what you can afford to lose. Good luck with your selections.