For all of our match predictions, pre-game poll and statistics for Jong Utrecht v NEC, scroll down - plus the latest betting odds.

Jong Utrecht will be hoping for a repeat of their last result, following the 2-3 Eerste Divisie success versus Go Ahead Eagles.

It has been all too rare in recent times where Jong Utrecht haven’t conceded. The reality is that Jong Utrecht have seen their defence breached in 5 of their previous 6 matches, shipping 13 goals on the way. We will find out if that trend will end up being continued on here.

Going into this one, Jong Utrecht have not won at home in their last 4 league games. Their fans aren't happy.

NEC go into this game following a 6-0 Eerste Divisie win over FC Eindhoven in their last outing.

The stats don’t lie, and NEC have been scored against in 5 of their last 6 matches, letting opponents get 7 goals in total. Defensively, NEC just haven’t been too solid at all.

Checking on their past head to head results going back to 27/10/2017 reveals that these encounters have been a source of anguish for Jong Utrecht. They’ve not managed to get themselves any wins at all while NEC have been dominant against them, getting wins in 83 per cent of those games played.

A combined total of 17 goals were scored between them throughout the course of those matches, with 4 from Jong Utrecht and 13 created by NEC. That’s an average goals per game of 2.83.

Jong Utrecht boss René Hake has a full complement, with no fitness concerns whatsoever coming into this clash with a completely injury-free squad to choose from.

Due to a mostly full-strength group of players, there is only a single fitness issue for the NEC boss Rogier Meijer to contend with. Mathias De Wolf (Back Injury) misses out for this game.

We’re thinking that Jong Utrecht are certainly able to breach the defence of this NEC side, but a single goal isn’t likely to be enough to avoid defeat.

Therefore, we think that it’s going to be both teams to score in a 1-2 winning margin for NEC when the full-time whistle blows. It really should be an interesting one. 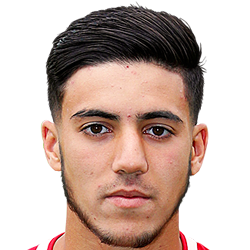 Normally taking to the field in the Striker position, Mohamed Mallahi was born in Netherlands. Having made a first senior appearance for Jong Utrecht in the 2017 - 2018 season, the goalscoring Forward has accumulated 2 league goals in the Eerste Divisie 2020 - 2021 campaign to date in a total of 6 appearances.

While we have made these predictions for Jong Utrecht v NEC for this match preview with the best of intentions, no profits are guaranteed. Always gamble responsibly, and with what you can afford to lose. Best of luck.