Return to this page a few days before the scheduled game when this expired prediction will be updated with our full preview and tips for the next match between these teams.
VfL Bochum are the guests at Wildparkstadion on Sunday for the Bundesliga 2 showdown with hosts Karlsruher SC. Scroll down to see all of the predictions, poll and statistics for Karlsruher SC v VfL Bochum - along with the latest match odds.

Karlsruher SC fans will want a repeat of their previous result, being the 2-0 Bundesliga 2 victory against SV Darmstadt 98. For Karlsruher SC, goals were scored by Philipp Hofmann (66') and Marvin Wanitzek (96').

Under three goals per game were scored during 5 of the last 6 meetings where Karlsruher SC have taken part. With regard to the goal weighting from this period, opposition teams scored a total of 7 while KSC got themselves 6. That aside, it remains to be seen if such a trend will be maintained in this upcoming game or not.

VfL Bochum head into the match following a 3-0 Bundesliga 2 win to beat 1. FC Heidenheim in their most recent outing. For VfL Bochum , the scorers were Anthony Losilla (11'), Jordi Osei-Tutu (34') and Silvère Ganvoula (64').

In the course of their six most recent matches, Thomas Reis's VfL Bochum have seen their goal attempts be successful 10 times, earning them a goals scored per game average of 1.67.

Taking a look at their past results, VfL Bochum :

Drawn results are a common outcome in games between the two sides. In their head to head clashes going back to 21/02/2015, the records show 5 of them. That’s a comparatively high 83 per cent of games finishing all-square.

In all, 15 goals were yielded between them in these games, with 9 of them for KSC and 6 created by Die Unabsteigbaren. That is an average goals per game value of 2.5.

The previous league match featuring the two was Bundesliga 2 match day 10 on 20/10/2019 and the score finished VfL Bochum 3-3 Karlsruher SC. The match was refereed by Nicolas Winter.

There’s just one fitness concern for the Karlsruher SC boss Christian Eichner to be concerned with from an otherwise fully-primed group. Marc Lorenz (Hip injury) is out of contention. Anis Ben-Hatira will not be able to play in this game through being suspended.

In our opinion, VfL Bochum and Karlsruher SC should both get enough opportunities to score, although it’s hard to separate the two. Let’s see how this one goes, but it looks this could be a draw. We therefore see a close game with a 1-1 score at the end of this one.

Both Teams to Score Prediction for Karlsruhe vs VfL Bochum
Yes 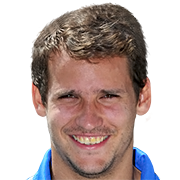 Regularly used in the Striker position, Anton Fink was born in Germany. Having made his senior debut playing for SpVgg Unterhaching in the 2008 - 2009 season, the talented Forward has contributed 3 league goals in this Bundesliga 2 2019 - 2020 campaign to date from a total of 16 appearances.

We have made these Karlsruher SC v VfL Bochum predictions for this match preview with the best intentions, but no profits are guaranteed. Please always gamble responsibly, only with money that you can afford to lose. Good luck with your selections.