KV Kortrijk line up against away team Oostende at Guldensporenstadion in the First Division A fixture on Saturday.

For all of our match predictions, pre-game poll and statistics for KV Kortrijk v Oostende, scroll down (including the best match odds).

KV Kortrijk won’t want a repeat of their last result here following a 3-2 First Division A losing effort in their last game against KV Mechelen.

It has been all too rare in recent times where KV Kortrijk have shown defensive steel. The facts show that KV Kortrijk have failed to prevent opponents from scoring in 5 of their previous 6 games, shipping 10 goals along the way. It will be interesting to find out whether or not that trend will end up being continued on into this next match.

Ahead of this clash, KV Kortrijk are undefeated in their last 2 home league matches.

Since suffering a loss in their previous game against Cercle Brugge in First Division A competition, Oostende will be hoping to turn things around here.

In a total of 6 of the previous 6 clashes featuring Oostende, three or more goals have been hit. The overall average number of goals per match in that time is 3, with the number of goals averaged by Oostende coming out as 0.67.

Their previous form shows that Oostende:

A look at their prior head to head clashes dating back to 29/11/2020 shows that KV Kortrijk have won 4 of these and Oostende 2, with the number of draws being 0.

15 goals were yielded between them throughout the course of those matches, with 9 from De Kerels and 6 coming from De Kustboys. The average number of goals per game works out to 2.5.

The last league game featuring the two was First Division A match day 16 on 06/11/2022 when it finished Oostende 3-1 KV Kortrijk.

The referee was Wim Smet.

Oostende manager Dominik Thalhammer has to choose a team with limited availability. Cameron McGeehan (Ankle Injury) and Maxime D'Arpino (Meniscal Injury) will not be playing here.

In our opinion, Oostende have the firepower to put a goal past this KV Kortrijk side, but that probably shouldn’t be enough to avoid defeat.

We think that it’s going to be a very close game with a 2-1 win for KV Kortrijk after 90 minutes. Definitely a tough call. 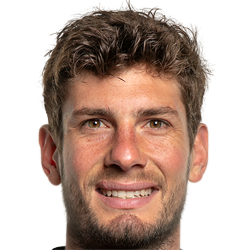 Regularly played in the Striker position, Felipe Avenatti was born in Montevideo, Uruguay. After having played his first senior match for Ternana in the 2013 - 2014 season, the accomplished Forward has scored a sum of 6 league goals in the Pro League 2022 - 2023 campaign so far coming from a total of 18 appearances.

While we have made these predictions for KV Kortrijk v Oostende for this match preview with the best of intentions, no profits are guaranteed. Always gamble responsibly, and with what you can afford to lose. Best of luck with your selections.