To see all of our predictions, user poll & stats for KV Kortrijk v Royal Excel Mouscron, scroll down including the latest game odds.

KV Kortrijk will want to continue from where they left off last time out with the 0-1 First Division A success versus Cercle Brugge.

The only name on the scoresheet from KV Kortrijk was Faiz Selemani (67').

Yves Vanderhaeghe's KV Kortrijk have managed to score a sum total of 6 times over their past 6 outings. The comparative number of goals that they have conceded in those same fixtures stands at 7.

Since being beaten in their last game against SV Zulte Waregem in First Division A action, Royal Excel Mouscron will be aiming to make amends here.

The numbers tell their own story, and Royal Excel Mouscron have been scored against in 5 of their last 6 games, seeing opposing sides hit 6 goals in total. At the back, Mouscron have some weaknesses to address.

Analysis of their past results shows that Royal Excel Mouscron:

If we look at their past head to head meetings going back to 16/09/2018, both clubs have shared the honours with KV Kortrijk winning 3 of those games, Royal Excel Mouscron 3 and 0 being draws in normal time.

An aggregate of 16 goals were scored between them in this period, with 8 for De Kerels and 8 for Mouscron. That’s an average goals per game of 2.67.

The previous league contest featuring these clubs was First Division A match day 19 on 13/12/2019 which ended up with the score at KV Kortrijk 1-2 Royal Excel Mouscron.

Regarding absentees, there’s just one fitness concern for the KV Kortrijk boss Yves Vanderhaeghe to be concerned about thanks to an almost full-strength set of players. Brendan Hines-Ike (Muscle Injury) will miss out.

Thanks to a mainly healthy group of players, there’s just the sole fitness issue for the Royal Excel Mouscron manager Fernando Da Cruz to be concerned about. Cedric Omoigui (Knee Injury) misses out for this game.

We’re inclined to think that KV Kortrijk have it within them to create enough chances to score more than one when they play Royal Excel Mouscron, who may well find it hard to break down their defence.

We reckon that it will be a 2-0 winning margin for KV Kortrijk at the end of the match. 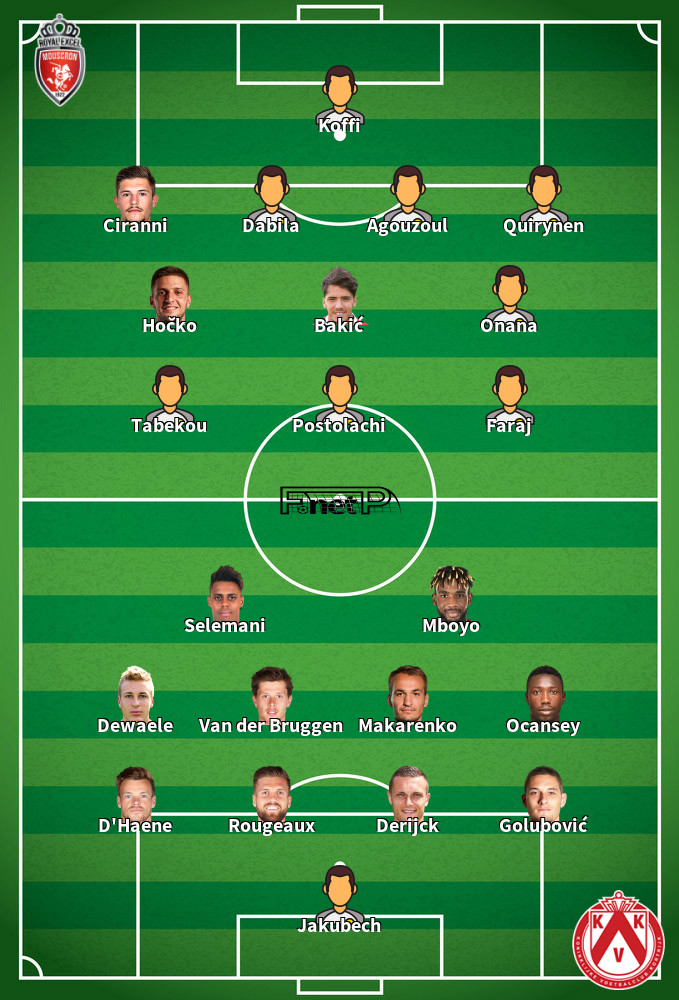 While we have made these predictions for KV Kortrijk v Royal Excel Mouscron for this match preview with the best of intentions, no profits are guaranteed. Always gamble responsibly, and with what you can afford to lose.