For all of our match predictions, pre-game poll and statistics for Ludogorets Razgrad v Montana, scroll down (including the best match odds).

Ludogorets Razgrad enter this match following on from a 1-1 First League drawn result vs Tsarsko Selo.

Matches featuring Ludogorets Razgrad have proved to be absorbing ones recently with plenty of scoring the rule rather than the exception. Over their past 6 clashes alone, the sum total of 20 goals have been recorded for both sides combined (at an average of 3.33 goals per game) with 15 of these accredited to The Eagles. We will see whether or not that trend can be sustained into this next match.

Going into this contest, Ludogorets Razgrad are undefeated in their last 35 league matches at home. A fantastic home record.

The stats don’t lie, and Montana have been scored against in 5 of their last 6 games, conceding 7 goals in all. Defensively, Montana have some weaknesses to address.

Heading into this fixture, Montana have not won away from home in their last 13 league games. They clearly need to do something about it.

Looking over their past head to head results stretching back to 24/10/2015 tells us that these encounters have ended in disappointment for Montana. They have not been able to get any wins at all while Ludogorets Razgrad have dominated them, running out winners in 100 per cent of those games where they have faced each other.

A combined total of 16 goals were scored between them throughout the course of those matches, with 14 of them from The Eagles and 2 being from Montana. This gives an average number of goals per game equal to 2.67.

The previous league encounter featuring these clubs was First League match day 10 on 25/10/2020 which ended up with the score at Montana 1-3 Ludogorets Razgrad.

The referee was Nikolay Kolev.

With a completely healthy squad available to choose from, Montana manager Atanas Atanasov does not have any fitness concerns whatsoever ahead of this game.

Our thinking is that Ludogorets Razgrad are likely to get a lot of shots on goal and make them count.

However, Montana may well find it hard to find the back of the net - but, we do see them managing to get on the scoresheet as well here.

We’re therefore expecting to see a 3-1 winning margin for Ludogorets Razgrad at the end of the match. 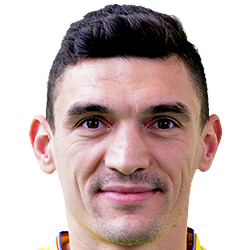 Usually taking to the field in the Striker position, Claudiu Keșerü was born in Oradea, Romania. Having played his first senior match for Nantes in the 2004 - 2005 season, the talented Forward has netted 14 league goals in this First League 2020 - 2021 season so far in 18 appearances.

We have made these Ludogorets Razgrad v Montana predictions for this match preview with the best intentions, but no profits are guaranteed. Please always gamble responsibly, only with money that you can afford to lose. Good luck with your selections.