Return to this page a few days before the scheduled game when this expired prediction will be updated with our full preview and tips for the next match between these teams.
Full-Time Result Prediction
👉
Türkgücü München to Win

Meppen arrive at Olympiastadion on Sunday for the 3rd Liga game with hosts Türkgücü München.

View all Türkgücü München v Meppen tips, stats and our pre-match poll below - plus the latest match odds.

Türkgücü München will be hoping to bounce back here following the 3-2 3rd Liga loss in their previous game against Duisburg.

It has been a rare occasion in recent games where Türkgücü München haven’t conceded. The reality is that Türkgücü have been scored against in 5 of their previous 6 games, leaking 10 goals on the way.

Going into this contest, Türkgücü München haven’t won at home in the past 2 league games.

Meppen come into this meeting following a 2-1 3rd Liga win in the defeat of Bayern Munich II in their most recent match.

The only name on the scoresheet from Meppen was Steffen Puttkammer (45', 72'). Jann-Fiete Arp (58') was the scorer for Bayern Munich II.

The numbers tell their own story, and Meppen have been scored against in 5 of their last 6 matches, conceding 12 goals in total. In defence, Meppen have some weaknesses to address. We shall soon see if that trend will end up being continued on here.

Türkgücü München boss Serdar Dayat doesn’t have any fitness worries whatsoever ahead of this clash thanks to a fully injury-free group ready to go.

Meppen boss Torsten Frings has to currently contend with reduced team options. Markus Ballmert (Ruptured syndesmotic ligament), Thilo Leugers (Achilles tendon problems) and Matthis Harsman (Pubitis) will miss out on this game. Players who are serving a ban and are therefore ineligible to play are Christoph Hemlein and Lars Bünning.

We’re of the opinion that Meppen may find it difficult to get anything against this Türkgücü München lineup who should just have the edge.

We’re therefore tipping a very competitive encounter with a 1-0 winning score for Türkgücü München when all is said and done. 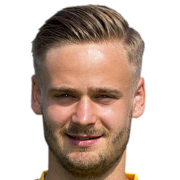 Mostly taking up the Striker position, Lucas Röser was born in Ludwigshafen am Rhein, Germany. After making a first senior appearance for Sonnenhof Großaspach in the 2016 - 2017 season, the accomplished Forward has scored 3 league goals in the 3. Liga 2020 - 2021 season to date in a total of 14 appearances.

We have made these Türkgücü München v Meppen predictions for this match preview with the best intentions, but no profits are guaranteed. Please always gamble responsibly, only with money that you can afford to lose. Good luck!