View all MTK Budapest v Mezőkövesd tips, stats and our pre-match poll below (including the best match odds).

MTK Budapest will be looking to improve on their last outing here following a 3-2 Nemzeti Bajnokság I defeat in their last game at the hands of Paksi SE.

It has been a rare occasion in recent games where MTK Budapest haven’t conceded. It will be a concern for them that MTK Budapest have been scored against in 5 of their previous 6 matches, shipping 9 goals in the process. We will find out whether or not that trend can be continued on here.

Last time out, Mezőkövesd drew 2-2 in the Nemzeti Bajnokság I tie with Videoton FC.

Showing their predisposition for high-scoring encounters, we’ve seen goals 21 times in the last 6 matches in which Mezőkövesd have taken to the pitch, giving an average of 3.5 goals for each meeting. Opposition teams have managed 12 of those goals.

A look at their previous results shows us that Mezőkövesd:

Checking out their prior head to head duels dating back to 29/09/2018, both clubs have shared the honours with MTK Budapest winning 2 of those games, Mezőkövesd 2 and 2 being draws in regulation time.

A combined sum of 17 goals were produced between them in these games, with 7 of them for MTK and 10 coming from Mezőkövesd. The average number of goals per game works out to 2.83.

The last league match between the two was Nemzeti Bajnokság I match day 33 on 07/05/2021 when the final score was Mezőkövesd 5-1 MTK Budapest.

The referee was Káprály Mihály.

The MTK Budapest boss Giovanni Constantino has zero fitness worries to speak of before this match owing to a completely healthy group available to choose from.

Due to a completely healthy group available for selection, the Mezőkövesd manager Attila Pintér doesn’t have any fitness worries at all before this match.

Looking at these two, we feel that Mezőkövesd and MTK Budapest could both well score more than once here although it’s hard to see a clear-cut winner.

A draw looks like a realistic possibility but, again, we don’t expect it to end goalless. We therefore think that it’s going to be a 2-2 score at the end of this one. 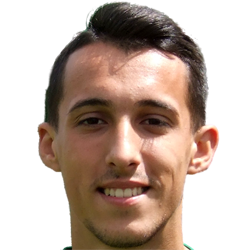 Mostly playing in the Striker position, Bojan Miovski was born in Štip, Macedonia. After having made a senior debut playing for MTK Budapest in the 2020 - 2021 season, the gifted Forward has managed 3 league goals in this Nemzeti Bajnokság I 2021 - 2022 campaign so far coming from a total of 6 appearances.

While we have made these predictions for MTK Budapest v Mezőkövesd for this match preview with the best of intentions, no profits are guaranteed. Always gamble responsibly, and with what you can afford to lose. Good luck if you do place a bet today.