The Stal Mielec v Raków Częstochowa live stream video is scheduled for broadcast on 16/09/2021. Soccer fans can watch this fixture on a live streaming service should the game be included in the schedule mentioned above. Here we arm you with helpful information for watching this Ekstraklasa game that includes the most recent team form, head to head meetings and our match views.

In order to watch this match via other sources, search for TV channel listings for your local region. These broadcasting deals are often distributed on a per-competition/league or even single match level. For fixtures shown live on regional television programmes, check the schedules on stations like BT Sport, Amazon Prime Video, Sky Sports, Now TV, iTV, Canal+, Fox Soccer, ESPN relevant to your current location.

Where the abovementioned broadcaster is showing Stal Mielec v Raków Częstochowa soccer live streaming coverage, you can view it on your mobile (iPhone, Android including Motorola) and desktop plus tablet (eg iPad, Venturer).

After the match finishes, we may also link to match highlights from time to time. We are not responsible for the transmission of any game video content linked to from this site. All legal issues must be dealt with via the hosters/owners of said content.

Stal Mielec will be facing visitors Raków Częstochowa at Stadion Stali Mielec in the Ekstraklasa clash on Sunday.

All Stal Mielec v Raków Częstochowa game predictions, stats and user poll are shown below (plus the best game odds).

It’s been a rare occasion in recent times that Stal Mielec have shown defensive steel. In fact, Stal Mielec have been scored against in 5 of their previous 6 clashes, shipping 9 goals during that time. Despite that, it remains to be seen whether that pattern might be sustained in this game or not.

In their last game, Raków Częstochowa drew 2-2 in the Ekstraklasa tie with Lech Poznań.

During their 6 previous matches, Marek Papszun's Raków Częstochowa have seen their efforts on goal rewarded a total of 7 times therefore earning them the goals scored per game average of 1.17.

The last league meeting between the two was Ekstraklasa match day 23 on 05/05/2021 and the score finished Stal Mielec 0-1 Raków Częstochowa.

On that day, Stal Mielec managed 45% possession and 4 shots on goal with 3 of them on target.

For their opponents, Raków Częstochowa got 7 shots at goal with 3 of them on target. Ivi López (93') was the scorer.

The match was refereed by Wojciech Myć.

It’s a low absenteeism rate, with just one fitness concern for the Stal Mielec gaffer Adam Majewski to be concerned with due to a largely intact squad. Aleksandar Kolev (Acromioclavicular Separation) is sidelined.

Thanks to a fully injury-free group to choose from, the Raków Częstochowa manager Marek Papszun does not have any fitness concerns to speak of coming into this game.

We think that Stal Mielec will have to play well to register a score against this Raków Częstochowa outfit who will likely get a goal themselves and run out victorious.

That’s why we have predicted a hard-fought contest, finishing with a 0-1 victory for Raków Częstochowa at the end of this one. 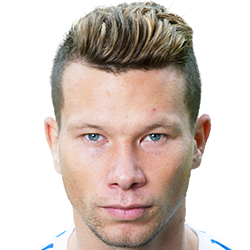 Regularly deployed in the Left Attacking Midfielder position, Mateusz Mak was born in Sucha Beskidzka, Poland. After making a first senior appearance for GKS Bełchatów in the 2011 - 2012 season, the gifted Midfielder has scored 2 league goals in this Ekstraklasa 2021 - 2022 campaign to date in 7 appearances.

While we have made these predictions for Stal Mielec v Raków Częstochowa for this match preview with the best of intentions, no profits are guaranteed. Always gamble responsibly, and with what you can afford to lose. Best of luck with your selections.

⚽️ Where can I get the odds for other Ekstraklasa matches?

View all of our next (and previous) Ekstraklasa predictions & previews here.