Sassuolo make the trip to Stadio Olimpico Grande Torino on Saturday for the Serie A meeting with home side Torino.

View all Torino v Sassuolo tips, stats and our pre-match poll below - plus the latest betting odds.

Torino won’t want a repeat of their last result here after a 1-0 Serie A loss in their previous game against Inter Milan.

Ivan Jurić's Torino have hit the back of the net 6 times over their past six outings. The corresponding number of goals that have been scored against them in those same fixtures is 6.

Looking at their past form shows that Torino:

After a losing effort in their last game against Udinese in Serie A competition, Sassuolo and their fans will hope to get a better result this time.

The forward players for Sassuolo have been starved of goals over their last 6 encounters, recording the poor return of only 4. In those fixtures, Sassuolo have also seen the collective goal aggregate of opposing teams equal 8.

Their past results show that Sassuolo:

A glance at their most recent head-to-head meetings dating back to 25/08/2019 shows us that Torino have won 3 of these games and Sassuolo 1, with the number of drawn results being 2.

An aggregate of 20 goals were scored between them in these games, with 11 of them for Il Toro and 9 netted by Sassuolo. The average goals per game has been 3.33.

That time, Torino had 50% possession and 21 shots on goal with 6 of them on target. The scorer was Antonio Sanabria (16').

Sassuolo had 6 shots on goal with 1 on target. Giacomo Raspadori (88') scored.

The match was refereed by Francesco Fourneau.

We think that Il Toro will probably line up in a 3-4-2-1 formation for this one, beginning the first half with V. Milinkovic-Savic, Koffi Djidji, A. Buongiorno, Wilfried Singo, Valentino Lazaro, Perr Schuurs, Sasa Lukic, Karol Linetty, Demba Seck, Nikola Vlasic and Nemanja Radonjic.

Our thinking is that Sassuolo could well find it tough to score goals against this Torino side who we think will likely get a goal themselves and run out victorious.

We therefore fancy a very competitive encounter with a 1-0 win for Torino at the end of this game. 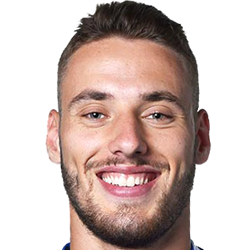 Mostly taking to the field in the Central Attacking Midfielder position, Nikola Vlašić was born in Split, Croatia. After having made a senior debut playing for Hajduk Split in the 2014 - 2015 season, the talented Midfielder has hit 3 league goals in this Serie A 2022 - 2023 season to date in 6 appearances.

We have made these Torino v Sassuolo predictions for this match preview with the best intentions, but no profits are guaranteed. Please always gamble responsibly, only with money that you can afford to lose. We wish you the best of luck.