Bologna arrive at Stadio Giuseppe Meazza on Monday for the Serie A showdown with hosts AC Milan.

For all of our match predictions, pre-game poll and statistics for AC Milan v Bologna, scroll down - as well as the best betting odds.

AC Milan fans will want a repeat of their previous result, being the 0-2 Europa League Qualifiers victory against Shamrock Rovers.

Matches involving AC Milan have usually been lively ones lately with a lot of goalmouth action the rule rather than the exception. Over their past half dozen clashes, a total of 21 goals have flown in for both teams combined (at an average of 3.5 goals per game) with 17 of those belonging to i Rossoneri.

In their last game, Bologna drew 1-1 in the Serie A tie with Torino.

In that game, Bologna managed 56% possession and 19 shots at goal with 5 on target. The only player to score for Bologna was Mattias Svanberg (18'). At the other end, Torino had 15 attempts at goal with 9 of them on target. Simone Zaza (66') was the scorer for Torino.

Demonstrating their appetite for fruitful matches, goals have been celebrated 20 times in the previous six games in which Bologna have played, giving an average of 3.33 goals per fixture. Opposing teams have hit 14 of this grand total. However, it remains to be seen if the trend shall be sustained in this game.

A quick look at their past head to head results stretching back to 10/12/2017 shows that these fixtures have ended in disappointment for Bologna. They have not managed to come away with any victories whatsoever while AC Milan have been dominant against them, winning in 83 per cent of those games where they have faced each other.

A sum of 20 goals were scored between the two sides during those clashes, with 14 of them from i Rossoneri and 6 created by Rossoblu. This gives an average number of goals per game equal to 3.33.

Bologna had 8 shots at goal with 3 on target. Takehiro Tomiyasu (44') was the scorer.

Due to a completely injury-free group available to select from, Bologna boss Siniša Mihajlović has zero fitness concerns to speak of before this clash. Gary Medel cannot play in this game through suspension.

AC Milan will most probably have the majority of the possession and should be able to turn a few of their chances into goals.

At the same time, Bologna could well find it tough getting on the scoresheet but do we see them getting the chances to score, too.

Therefore, we are anticipating a controlled 3-1 winning score for AC Milan when the full-time whistle blows.

Both Teams to Score Prediction for AC Milan vs Bologna
Yes 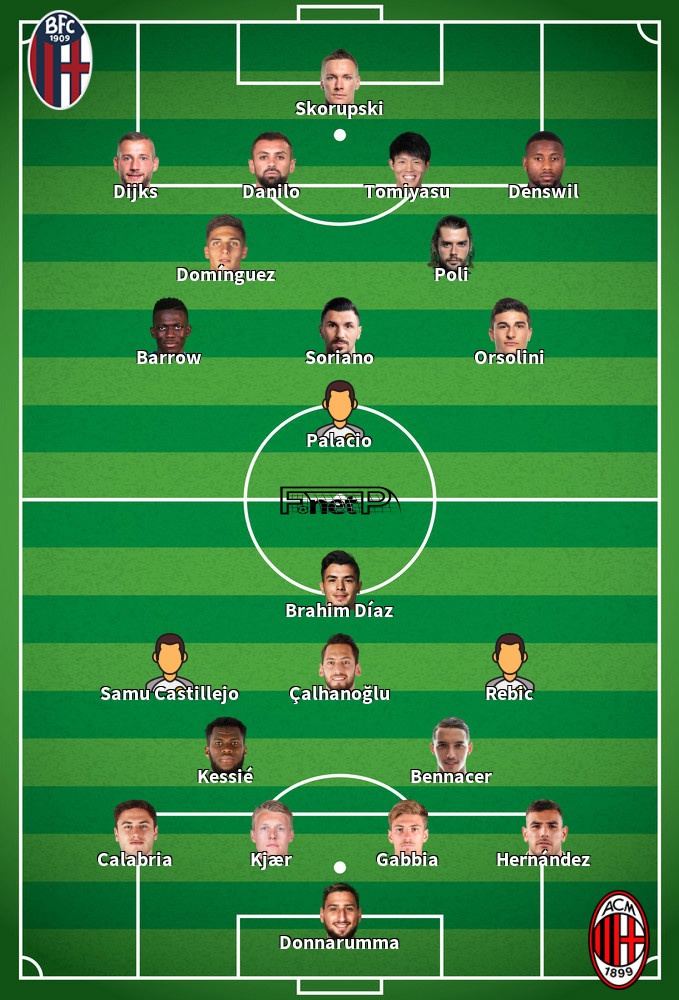 We have made these AC Milan v Bologna predictions for this match preview with the best intentions, but no profits are guaranteed. Please always gamble responsibly, only with money that you can afford to lose. Good luck if you do place a bet today.