Norrby IF journey to Tunavallen on Thursday for the Superettan fixture with home team AFC Eskilstuna.

For all of our match predictions, pre-game poll and statistics for AFC Eskilstuna v Norrby IF, scroll down - along with the latest match odds.

AFC Eskilstuna will be wanting a better result here following a 2-1 Superettan loss in their previous game against Halmstads BK.

Matches featuring AFC Eskilstuna have often been lively affairs of late with a lot of goalmouth action being a common characteristic. Over their past six clashes, the sum of 27 goals have gone in for both teams combined (at an average of 4.5 goals per game) with 16 of those coming from AFC Eskilstuna. In any event, we will just have to wait and see whether that pattern will continue on in this match or not.

In their previous game, Norrby IF drew 1-1 in the Superettan match with Orgryte.

The stats don’t lie, and Norrby IF have been scored against in 5 of their last 6 games, seeing opposing sides hit 8 goals in all. Defensively, Norrby IF could really do with shoring things up.

Heading into this fixture, Norrby IF have not won away from home in their last 2 league games.

Inspecting their prior head to head clashes going back to 28/05/2018 tells us that AFC Eskilstuna have won 4 of these games and Norrby IF 1, with the number of drawn games standing at 1.

15 goals were scored between the two sides during those clashes, with 12 from AFC Eskilstuna and 3 belonging to Norrby. That’s an average goals per game of 2.5.

The last league encounter featuring these sides was Superettan match day 16 on 14/08/2021 and the score finished AFC Eskilstuna 4-1 Norrby IF.

Norrby IF had 8 attempts at goal with 3 on target. Dijan Vukojevic (76') was the scorer.

The match was refereed by Farouk Nehdi.

The AFC Eskilstuna manager Jawad Al Jebouri has no fitness concerns whatsoever coming into this game with a fully healthy squad to choose from.

Owing to a completely healthy squad available to choose from, the Norrby IF boss Mak Lind has no fitness worries to report ahead of this match.

In our view, Norrby IF and AFC Eskilstuna may both struggle to make a breakthrough here.

We’ll have to see, but a draw might be on the cards. With that in mind, we reckon that it will be a tight encounter with a 0-0 draw at the end of the 90 minutes. 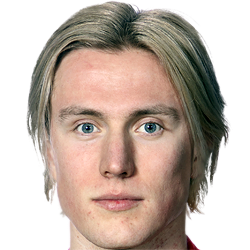 Mostly playing in the Striker position, Viktor Götesson was born in Sweden. Having played his first senior match for Mjällby AIF in the 2014 season, the dangerous Forward has scored 2 league goals in this Superettan 2022 campaign to date coming from a total of 4 appearances.

While we have made these predictions for AFC Eskilstuna v Norrby IF for this match preview with the best of intentions, no profits are guaranteed. Always gamble responsibly, and with what you can afford to lose.