The Superliga meeting at Nature Energy Park on Sunday sees home side Odense BK go up against opponents AGF Aarhus.

To see all of our predictions, user poll & stats for Odense BK v AGF Aarhus, scroll down (including the best match odds).

Odense BK will be looking to improve on their last outing here after a 1-2 Superliga defeat last time out to AGF Aarhus.

It’s been a rare occasion in recent times that Odense BK have managed to hold out for a full 90 minutes. The facts show that Odense BK have failed to prevent opponents from scoring in 5 of their previous 6 games, leaking 12 goals on the way. We will see whether or not that trend can be continued on into this next match.

Going into this game, the form guide shows that AGF Aarhus:

Looking at their past head-to-head clashes going back to 27/09/2020 shows us that Odense BK have won 2 of these and AGF Aarhus 1, with the number of drawn games standing at 3.

A combined sum of 14 goals were shared by the two clubs throughout the course of those matches, with 7 from De Stribede and 7 belonging to De Hviie. That is an average goals per game value of 2.33.

The last league clash between the two was Superliga match day 6 on 01/05/2022 when the final score was Odense BK 1-0 AGF Aarhus.

That day, Odense BK managed 56% possession and 16 shots at goal with 3 on target. Their only player to score was Jakob Breum (6').

On the other side, AGF Aarhus got 16 shots at goal with 4 of them on target.

The match was refereed by Jens Grabski Maae.

The Odense BK boss Andreas Alm will be thankful to have no fitness concerns at all coming into this game with a fully healthy squad available to choose from.

With a completely injury-free group ready to go, the AGF Aarhus manager Uwe Rösler has zero fitness concerns at all ahead of this clash.

We’ve got the feeling that AGF Aarhus and Odense BK are probably both going to find scoring goals difficult here.

It’s looking like it could well end up as a draw. We therefore see a very competitive game with a 0-0 draw at the end of this one. 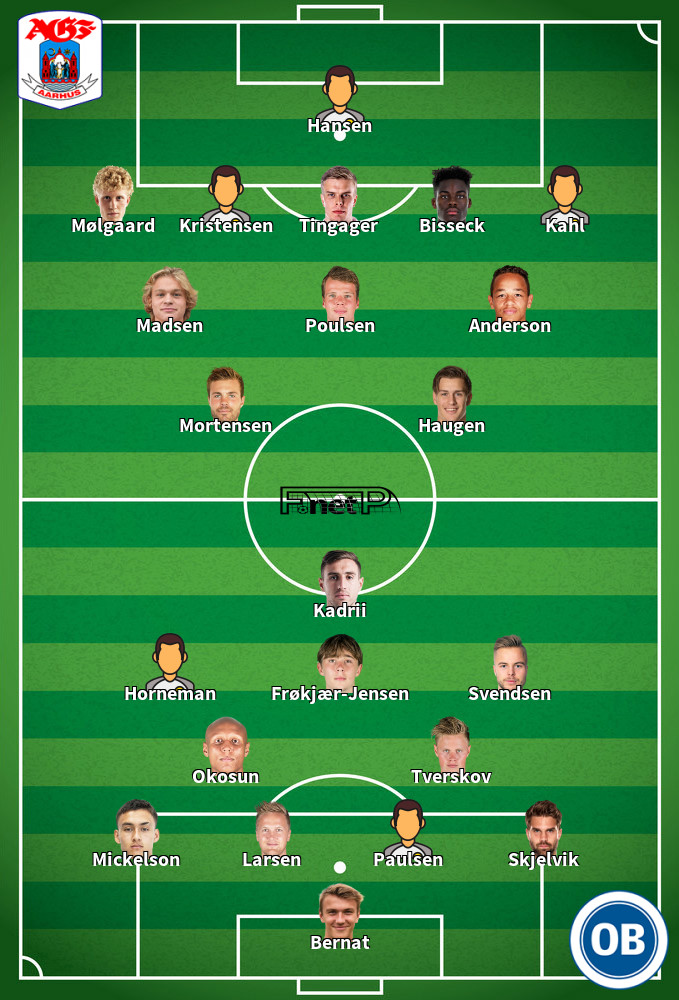 While we have made these predictions for Odense BK v AGF Aarhus for this match preview with the best of intentions, no profits are guaranteed. Always gamble responsibly, and with what you can afford to lose.