The National League game at Chigwell Construction Stadium on Monday will see hosts Dagenham & Redbridge ready themselves for the challenge from opponents Aldershot Town.

Scroll down to see all of the predictions, poll and statistics for Dagenham & Redbridge v Aldershot Town - plus the latest betting odds.

Dagenham & Redbridge will be wanting a better result here following the 2-1 National League defeat last time out to Hartlepool United.

The only player to score from Dagenham & Redbridge was Matt Robinson (32'). Rhys Oates (21') and Gavan Holohan (61') scored for Hartlepool United.

Over their past six games, Daryl McMahon's Dagenham & Redbridge have celebrated scoring 6 times - an average number of goals per match of 1.

Since a loss in their previous game against Stockport County in National League action, Aldershot Town will be hoping to turn things around here.

The only name on the scoresheet from Aldershot Town was Josh Rees (74'). Jack Stretton (37') and Ash Palmer (68') scored for Stockport County.

The numbers tell their own story, and Aldershot Town have been scored against in 5 of their last 6 games, letting opponents get 8 goals in all. Defensively, The Shots just haven’t been too solid at all. In any event, we must now wait to see whether the trend shall be sustained in this match.

A glance at their most recent head-to-head meetings dating back to 10/02/2018 tells us that Dagenham & Redbridge have won 2 of them & Aldershot Town 3, with the tally of drawn games being 1.

A sum of 18 goals were yielded between them during those clashes, with 10 of them from The Daggers and 8 coming from The Shots. That’s an average goals per game of 3.

The last league clash between these sides was National League match day 13 on 05/12/2020 which finished with the scoreline of Aldershot Town 2-1 Dagenham & Redbridge.

Dagenham & Redbridge boss Daryl McMahon has zero fitness worries whatsoever before this clash thanks to a completely injury-free squad available for selection.

Thanks to a completely injury-free group to choose from, Aldershot Town manager Danny Searle has no fitness concerns at all ahead of this game.

Aldershot Town will have to perform well to see themselves scoring against this Dagenham & Redbridge lineup who will likely score at least once to gain the upper hand.

We’re therefore seeing a hard-fought contest, finishing with a 1-0 winning score for Dagenham & Redbridge at the end of the match. 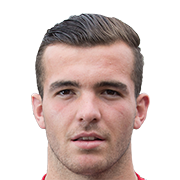 Usually played in the Centre Midfield position, Mitch Brundle was born in England. Having made his senior debut playing for Cheltenham Town in the 2013 - 2014 season, the skilful Midfielder has contributed 3 league goals in this National League 2020 - 2021 season so far coming from a total of 17 appearances.

We have made these Dagenham & Redbridge v Aldershot Town predictions for this match preview with the best intentions, but no profits are guaranteed. Please always gamble responsibly, only with money that you can afford to lose.