Amorebieta will be visiting Estadio Heliodoro Rodríguez López on Sunday for the La Liga 2 showdown with home team Tenerife.

Our tips, poll and stats for Tenerife v Amorebieta can all be found here (inc. the best betting odds).

Tenerife, buoyed by their previous result, will be hoping for more of the same after the 1-2 La Liga 2 triumph vs SD Huesca.

In that match, Tenerife managed 45% possession and 9 shots at goal with 3 of them on target. For Tenerife, goals were scored by Àlex Corredera (34') and Samuel Shashoua (56'). SD Huesca had 10 shots on goal with 4 on target. Joaquín Muñoz (31') was the scorer for SD Huesca.

Luis Ramis's Tenerife have managed to score a sum total of 8 times in their prior six outings. The comparative number of goals that they have conceded in those same fixtures amounts to 6.

In their previous game, Amorebieta drew 1-1 in the La Liga 2 tie with Sporting Gijón.

Amorebieta have attacked well in the lead-up to this encounter, having scored 7 goals in their previous 6 matches. While their manager Iñigo Vélez will no doubt take that as a positive sign, Amorebieta have had their own issues at the back, also conceding in 6 of those same games.

Due to a mostly healthy group of players, there’s only a single fitness issue for the Amorebieta gaffer Iñigo Vélez to be concerned with. Iker Unzueta (Sprained ankle) misses out for this game.

We’re inclined to think that Tenerife will, in all likelihood, be able to create a high number of chances and successful shots on target.

At the other end, Amorebieta will not find it easy getting on the scoresheet although we do see them pulling one back during this clash.

Our tip is for a comfortable 3-1 winning margin for Tenerife by the time that the referee blows the final whistle. 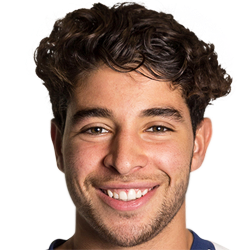 Usually playing in the Central Attacking Midfielder position, Samuel Shashoua was born in Westminster, England. Having made a first senior appearance for Tenerife in the 2020 - 2021 season, the dangerous Midfielder has accumulated 3 league goals in this LaLiga2 2021 - 2022 season so far in 8 appearances.

While we have made these predictions for Tenerife v Amorebieta for this match preview with the best of intentions, no profits are guaranteed. Always gamble responsibly, and with what you can afford to lose. Good luck if you do place a bet today.