Atromitos take on guests Apollon Smyrni at Peristeri Stadium in the Super League match on Saturday.

Our full set of predictions, statistics and match poll for Atromitos v Apollon Smyrni can be seen below - plus the latest match odds.

Atromitos will be hoping to bounce back here following a 1-0 Super League loss in their previous game against PAS Giannina.

Atromitos haven’t exactly had impressive attacking statistics in more recent games. Their sum of goals equals just 3 against opposition teams over the course of their last 6 fixtures. In those meetings, Atromitos have also seen the tally of goals that have gone against them total 8.

Following on from a losing effort in their last game against Larissa in Super League action, Apollon Smyrni and their fans will hope to get a better result this time.

In that game, Apollon Smyrni managed 58% possession and 10 shots on goal with 5 on target. For their opponents, Larissa had 9 attempts at goal with 7 on target. Fiorin Durmishaj (67') and Marko Nunić (96') scored for Larissa.

Over the course of 5 of the prior six clashes involving Apollon Smyrni, a notably low volume of goals have been struck between them and opposing teams. The overall average number of goals per game during that spell works out to a paltry 1.83, with the average goals for Light Bridgade equalling 0.5. We will have to see whether or not that trend can be sustained here.

Coming into this clash, Apollon Smyrni haven’t won away from home in the past 4 league matches.

A look at their most recent head-to-head meetings going back to 21/08/2017 shows that Atromitos have won 2 of these games & Apollon Smyrni 1, with the number of drawn games standing at 3.

A combined sum of 15 goals were scored between the two sides in these games, with 9 of them from Atromitos and 6 coming from Light Bridgade. That’s an average goals per game figure of 2.5.

The previous league contest featuring these clubs was Super League match day 22 on 13/02/2021 which finished with the scoreline of Apollon Smyrni 2-1 Atromitos.

On that day, Apollon Smyrni managed 48% possession and 3 attempts at goal with 3 on target. The goalscorers were Thomás (42') and Abiola Dauda (67').

For their opponents, Atromitos got 13 attempts on goal with 5 of them on target. Theofanis Mavromatis (90') scored.

The referee was Manolis Skoulas.

Atromitos boss Savvas Pantelidis has no fitness concerns whatsoever coming into this game thanks to a completely injury-free squad available for selection.

Due to a completely injury-free group ready to go, Apollon Smyrni boss Makis Chavos has no fitness concerns to speak of ahead of this clash.

We feel that in this game, Atromitos certainly have the ability to get amongst the goals when they come up against Apollon Smyrni, who might well find it difficult to find the back of the net.

Our tip is for a 2-0 victory for Atromitos at the end of the match. 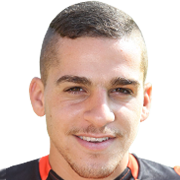 Typically used in the Central Attacking Midfielder position, Amir Agayev was born in Rishon LeZion, Israel. Having made his senior debut playing for Atromitos in the 2020 - 2021 season, the gifted Midfielder has struck 3 league goals in this Super League 2020 - 2021 campaign to date in a total of 17 appearances.

We have made these Atromitos v Apollon Smyrni predictions for this match preview with the best intentions, but no profits are guaranteed. Please always gamble responsibly, only with money that you can afford to lose. Good luck with your selections.