Return to this page a few days before the scheduled game when this expired prediction will be updated with our full preview and tips for the next match between these teams.
Full-Time Result Prediction
👉
Ionikos to Win

The Super League game at Neapoli Stadium on Monday sees home team Ionikos ready themselves for the visit of Apollon Smyrni.

Our Ionikos v Apollon Smyrni predictions, statistics and match poll can be seen below - as well as the best betting odds.

Ionikos are hoping to win again following the 0-1 Super League victory versus Lamia.

Ionikos haven’t been able to stop scoring goals, netting in each and every one of their last 6 games.

They’ve claimed a sum of 11 during that time and have conceded a total of 9.

In the game prior to this, Apollon Smyrni drew 1-1 in the Super League match with Volos.

The forward players for Apollon Smyrni have failed to get amongst the goals over their last six games, netting the disappointing return of only 4. In those matches, Light Bridgade have also seen the collective goal aggregate against them equal 7. Putting that to one side, time will tell whether that trend will persist in this upcoming match.

The last league meeting featuring these sides was Super League match day 17 on 23/02/2022 when it finished Ionikos 4-0 Apollon Smyrni.

Apollon Smyrni got 2 shots at goal with 1 of them on target.

The Ionikos boss Dimitrios Spanos does not have any fitness worries whatsoever before this match owing to a completely injury-free squad to choose from.

With a fully injury-free group to choose from, the Apollon Smyrni boss Babis Tennes has no fitness concerns to report ahead of this match.

We’re thinking that Apollon Smyrni will need to push hard to score against this Ionikos team who we think should gain the upper hand.

That’s why we have predicted a very even contest with a 1-0 victory for Ionikos at the end of this one. 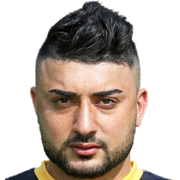 Typically deployed in the Central Attacking Midfielder position, Aias Aosman was born in Germany. Having made his senior debut playing for Regensburg in the 2013 - 2014 season, the goalscoring Midfielder has struck 6 league goals in this Super League 2021 - 2022 campaign so far in 29 appearances.

While we have made these predictions for Ionikos v Apollon Smyrni for this match preview with the best of intentions, no profits are guaranteed. Always gamble responsibly, and with what you can afford to lose.