Return to this page a few days before the scheduled game when this expired prediction will be updated with our full preview and tips for the next match between these teams.
Full-Time Result Prediction
👉
Panetolikos to Win

Apollon Smyrni are the guests at Panetolikos Stadium on Sunday for the Super League clash with home side Panetolikos.

Our full set of predictions, statistics and match poll for Panetolikos v Apollon Smyrni can be seen below - along with the latest match odds.

Panetolikos will be hoping to return to winning ways here following a 3-0 Super League loss in their previous game against PAS Giannina.

It has been all too rare in recent games that Panetolikos have shown defensive steel. It will be a concern for them that Panetolikos have failed to prevent opponents from scoring in 6 of their previous 6 clashes, letting in 17 goals during that time. Previous results aside, we will just have to wait and see if such a trend might persist in this next match.

In their previous fixture, Apollon Smyrni drew 2-2 in the Super League tie with AEK Athens.

It is worth noting that Apollon Smyrni have failed to get amongst the goals over their last six encounters, netting the disappointing return of just 4. In those fixtures, Light Bridgade have also seen the collective goal tally of opposing teams equal 7.

Heading into this fixture, Apollon Smyrni have not won away from home in their last 4 league games.

If we look at their past head to head duels dating back to 05/03/2018, neither club has come out on top overall with Panetolikos winning 3 of those games, Apollon Smyrni 3 and 0 being draws in normal time.

A combined total of 10 goals were produced between them during those clashes, with 5 of them from The Canaries and 5 for Light Bridgade. That is an average goals per game value of 1.67.

The previous league game between these clubs was Super League match day 4 on 17/04/2021 which ended up with the score at Panetolikos 1-0 Apollon Smyrni.

That time, Panetolikos managed 50% possession and 4 attempts on goal with 0 on target.

For their opponents, Apollon Smyrni had 5 shots on goal with 1 of them on target. Christos Lisgaras (84' Own goal) was the scorer.

The match was refereed by Manolis Skoulas.

The Panetolikos boss Yannis Anastasiou will be thankful to have no fitness concerns to speak of coming into this match with a completely injury-free squad available to choose from.

With a fully healthy squad to choose from, the Apollon Smyrni boss Gianluca Festa has no fitness concerns whatsoever before this game.

Looking at these two teams, we feel that Apollon Smyrni may not find it easy to see themselves scoring against this Panetolikos team who we reckon should get the win and a maybe even keep a clean sheet as well.

Therefore, we predict a very even match with a 1-0 winning margin for Panetolikos at the end of the match. 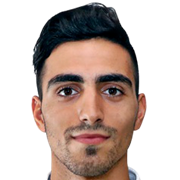 Typically played in the Striker position, Nikos Vergos was born in Greece. After making a first senior appearance for Olympiacos in the 2013 - 2014 season, the goalscoring Forward has scored a sum of 4 league goals in the Super League 2021 - 2022 season so far from a total of 9 appearances.

While we have made these predictions for Panetolikos v Apollon Smyrni for this match preview with the best of intentions, no profits are guaranteed. Always gamble responsibly, and with what you can afford to lose. We wish you the best of luck.