The Hertha Berlin v Arminia Bielefeld live stream video is set for broadcast on 09/05/2021. Football fans can watch the game on a live streaming service if this match is included in the schedule mentioned above. Here we show useful information for watching this Bundesliga 1 game including the most recent guide to form, head to head meetings and our game views.

In order to watch the game via other ways, search for TV channel listings relating to your local region. Such broadcasting rights are generally distributed on a per-competition/league or even individual game level. For matches shown live on regional television programmes, check the listings on channels such as BT Sport, Amazon Prime Video, Sky Sports, Now TV, iTV, Canal+, Fox Soccer, ESPN that are relevant for your current location.

Where the abovementioned broadcaster has the rights to the Hertha Berlin v Arminia Bielefeld soccer live streaming coverage, you can see the game on your mobile (iPhone, Android including Xiaomi) and computer or tablet (eg iPad, Samsung Galaxy Tab).

Post-game, we might also provide a link to highlights from time to time. We are not responsible for transmitting any game video content linked to from here. All legal complaints must be dealt with via the hosters/owners of such content.

Hertha Berlin will face off against away team Arminia Bielefeld at Olympiastadion Berlin in this Bundesliga 1 meeting on Sunday.

Our tips, poll and stats for Hertha Berlin v Arminia Bielefeld can all be found here - along with the latest match odds.

Hertha Berlin will be hoping for a repeat of their last result, following the 3-0 Bundesliga 1 success against Freiburg.

Over their last 6 games, Pál Dárdai's Hertha Berlin have netted a total of 10 times, an average number of goals scored per match equal to 1.67.

Going into this one, Hertha Berlin haven't been defeated in their previous 4 league matches at home.

Following on from being defeated in their last game at the hands of Borussia Mönchengladbach in Bundesliga 1 competition, Arminia Bielefeld will be aiming to make amends here.

For 5 of the past six games involving Arminia Bielefeld, a notably low volume of goals have been scored between them and opposing teams. The overall average goals scored per game during that period works out to a paltry 1.67, with the number of goals averaged by Bielefeld being 0.5. We will see whether or not that trend will be sustained in this game.

Heading into this fixture, Arminia Bielefeld haven’t won away from home in the past 3 league games.

A review of their most recent head to head clashes dating back to 06/02/2009 shows that Hertha Berlin have won 3 of these and Arminia Bielefeld 1, with the number of drawn results being 2.

In all, 13 goals were produced between them in this period, with 9 for Hertha and 4 netted by Bielefeld. This gives an average number of goals per game equal to 2.17.

The last league fixture featuring the two was Bundesliga 1 match day 15 on 10/01/2021 and the score finished Arminia Bielefeld 1-0 Hertha Berlin.

In that match, Arminia Bielefeld had 48% possession and 12 attempts at goal with 2 on target. The scorer was Reinhold Yabo (64').

On the other side, Hertha Berlin had 10 attempts at goal with 5 of them on target.

Due to a fully injury-free squad to choose from, Arminia Bielefeld manager Frank Kramer doesn’t have any fitness concerns at all before this match.

We think that Arminia Bielefeld could find themselves struggling to find the net against this Hertha Berlin side who we think will likely score at least once to gain the upper hand.

That’s why our selection here is for a very competitive encounter with a 1-0 winning margin for Hertha Berlin when the full-time whistle blows. 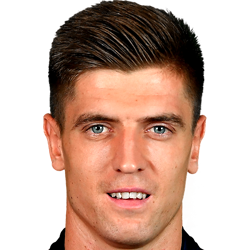 Mostly taking to the field in the Striker position, Krzysztof Piątek was born in Dzierżoniów, Poland. Having made his senior debut playing for Zagłębie Lubin in the 2015 - 2016 season, the accomplished Forward has got 6 league goals in the Bundesliga 1 2020 - 2021 campaign so far from a total of 29 appearances.

We have made these Hertha Berlin v Arminia Bielefeld predictions for this match preview with the best intentions, but no profits are guaranteed. Please always gamble responsibly, only with money that you can afford to lose. Good luck if you do place a bet today.

⚽️ Where can I get the tips for other Bundesliga 1 matches?

You can see all of the next (and previous) Bundesliga 1 predictions & previews here.