The La Liga game at The Estadio Abanca-Balaídos on Sunday will see home side Celta Vigo welcome opponents Athletic Bilbao.

Scroll down to see all of the predictions, poll and statistics for Celta Vigo v Athletic Bilbao (including the best match odds).

Celta Vigo will be hoping for a better result following the 1-0 La Liga losing effort in their last game against Mallorca.

In that match, Celta Vigo had 58% possession and 10 attempts on goal with 3 of them on target. At the other end, Mallorca had 8 shots at goal with 3 on target. Dani Rodríguez (59') was the scorer for Mallorca.

Carlos Carvalhal's Celta Vigo have netted a sum total of 7 times in their past six outings. Conversely, the number of goals that they have conceded in those fixtures amounts to 6.

Athletic Bilbao will go into the meeting after a 1-3 Copa del Rey win over Valencia in their most recent match.

Ernesto Valverde's Athletic Bilbao have managed to stick the ball in the net 11 times in the course of their latest sextet of matches. The number of goals that they have conceded during those matches adds up to 7.

Going into this game, the form guide shows that Athletic Bilbao:

A look at their past head to head clashes dating back to 06/10/2019 tells us that Celta Vigo have won 3 of these and Athletic Bilbao 1, with the tally of drawn results being 2.

In all, 8 goals were scored between the two sides in these games, with 6 of them from Os Celestes and 2 for Los Leones. The average goals per game has been 1.33.

The previous league meeting featuring these sides was La Liga match day 32 on 17/04/2022 which finished with the scoreline of Athletic Bilbao 0-2 Celta Vigo.

On that day, Athletic Bilbao managed 50% possession and 10 attempts on goal with 2 on target.

The Celta Vigo boss Carlos Carvalhal will be grateful not to have any fitness concerns to speak of coming into this clash owing to a fully healthy group available for selection.

Thanks to a mainly available group of players, there’s only the one fitness worry for the Athletic Bilbao gaffer Ernesto Valverde to be concerned about. Iñigo Martínez (Foot Injury) won’t be playing here.

Looking at these two, we feel that Athletic Bilbao and Celta Vigo should play out a closely-fought contest here.

Let’s see how it plays out, but a draw is looking likely to us. With that in mind, we reckon that it will be a close game with a 1-1 scoreline at the end of this one. 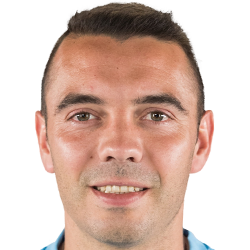 Mostly played in the Striker position, Iago Aspas was born in Moaña, Spain. After making a first senior appearance for Celta Vigo in the 2008 - 2009 season, the dangerous Forward has struck 8 league goals in the LaLiga 2022 - 2023 campaign so far from a total of 18 appearances.

While we have made these predictions for Celta Vigo v Athletic Bilbao for this match preview with the best of intentions, no profits are guaranteed. Always gamble responsibly, and with what you can afford to lose. We wish you the best of luck.