Return to this page a few days before the scheduled game when this expired prediction will be updated with our full preview and tips for the next match between these teams.
Full-Time Result Prediction
👉
Ballymena United to Win

Newry City make the trip to Ballymena Showgrounds on Tuesday for the Premiership meeting with home side Ballymena United.

Our predictions, user poll and statistics for Ballymena United v Newry City can be found here (including the best match odds).

Ballymena United will be hoping to return to winning ways here after the 3-0 Premiership loss in their previous game against Linfield.

Fewer than three goals per match were seen in 5 of the last 6 meetings where Ballymena United have taken part. With regard to the goal attribution during that period, their opponents scored a total of 7 and Ballymena United managed the sum of 5. That trend isn’t assured to follow through into this game, however.

Since a losing effort in their last game against Glentoran in Premiership action, Newry City and their travelling fans will hope for a better result here.

Coming into this contest, Newry City are without an away win for the past 6 league games.

A look at their past head-to-head meetings going back to 06/10/2018 tells us that Ballymena United have won 5 of these games and Newry City 1, with the number of drawn results standing at 0.

19 goals were yielded between them during those clashes, with 14 of them for Sky Blues and 5 for City. That is an average goals per game value of 3.17.

The previous league meeting featuring the two was Premiership match day 6 on 08/11/2022 and the score finished Newry City 3-2 Ballymena United.

The match was refereed by Declan Hassan.

The Ballymena United manager David Jeffrey does not have any fitness concerns to speak of before this game owing to a fully injury-free squad to choose from.

Thanks to a completely healthy squad available to choose from, the Newry City boss Darren Mullen doesn’t have any fitness concerns to speak of coming into this match.

In this game, Newry City have it within them to breach the defence of this Ballymena United outfit, however that possibly won’t be as many as the goals that they could concede.

We think that it’s going to be a narrow 2-1 winning score for Ballymena United after the 90. There shouldn’t be much in it, either way. 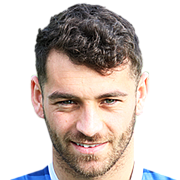 Generally played in the Striker position, David McDaid was born in Derry, N. Ireland. After having made a senior debut playing for Sligo Rovers in the 2008 season, the goalscoring Forward has managed 7 league goals in this Premiership 2022 - 2023 season so far coming from a total of 21 appearances.

We have made these Ballymena United v Newry City predictions for this match preview with the best intentions, but no profits are guaranteed. Please always gamble responsibly, only with money that you can afford to lose. Good luck if you do place a bet today.