The Championship clash at Oakwell Stadium on Saturday sees home side Barnsley facing opposition in the form of Blackburn Rovers.

Our predictions, user poll and statistics for Barnsley v Blackburn Rovers can be found here (including the best match odds).

Barnsley go into this fixture following a 1-1 Championship drawn game vs Stoke City.

It has been seldom in recent games where Barnsley haven’t conceded. In fact, Barnsley have failed to prevent opponents from scoring in 5 of their previous 6 clashes, shipping 8 goals along the way. That kind of pattern won’t necessarily be continued into this next game, of course.

Going into this one, Barnsley are without a win at home for the past 2 league games.

Blackburn Rovers will come into the match following a 2-0 Championship win to beat Hull City in their previous fixture.

Looking at their past form shows that Blackburn Rovers:

Checking on their past head to head clashes stretching back to 26/12/2016 shows us that Barnsley have won 4 of them & Blackburn Rovers 2, with the tally of draws standing at 0.

In all, 17 goals were shared by the two clubs during those clashes, with 11 from The Tykes and 6 netted by Rovers. The average number of goals per game works out to 2.83.

The last league contest between these clubs was Championship match day 30 on 17/02/2021 when it ended Barnsley 2-1 Blackburn Rovers.

That time, Barnsley managed 49% possession and 16 attempts at goal with 6 of them on target. The scorers were Carlton Morris (72') and Alex Mowatt (90').

Blackburn Rovers got 8 attempts at goal with 3 of them on target. Adam Armstrong (94') scored.

There aren’t many selection issues, with just the sole fitness concern for the Barnsley manager Markus Schopp to be concerned about from of an almost fully healthy set of players. Rémy Vita (Knee Injury) won’t play.

It seems to us that Blackburn Rovers and Barnsley could end up without much reward for their efforts here.

At this stage, it appears to have the makings of a possible draw. That’s why our selection here is for a very even match with a 0-0 draw when the full-time whistle blows. 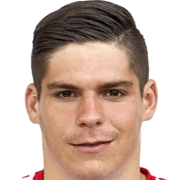 Normally used in the Right Attacking Midfielder position, Dominik Frieser was born in Austria. After having played his first senior match for TSV Hartberg in the 2013 - 2014 season, the accomplished Midfielder has got 2 league goals in this Championship 2021 - 2022 campaign to date in a total of 6 appearances.

We have made these Barnsley v Blackburn Rovers predictions for this match preview with the best intentions, but no profits are guaranteed. Please always gamble responsibly, only with money that you can afford to lose. Best of luck with your selections.