The Premier League meeting at Goodison Park on Sunday will see home side Everton ready themselves for the visit of Bournemouth.

All of our predictions, stats and the user poll for Everton v Bournemouth are shown below - as well as the best betting odds.

Everton, following on from their previous result, will be hoping for more of the same after a 0-1 Premier League success versus Sheffield United.

In that match, Everton had 49% possession and 5 attempts at goal with 2 on target. The only player to score for Everton was Richarlison (46').

It has been a rare occasion in recent times where Everton have managed to hold out for a full 90 minutes. It will be a concern for them that The Toffees have been scored against in 5 of their previous 6 matches, shipping 7 goals in the process. It will be interesting to see whether or not that trend will end up being continued on here.

Their past results show that Everton:

Since being beaten in their last game against Southampton in Premier League action, Bournemouth and their travelling supporters will be hoping that they can get a better result in this one.

The stats tell the story, and Bournemouth have been scored against in 5 of their last 6 games, letting opponents get 14 goals overall. At the back, The Cherries can certainly do much better.

Going into this encounter, Bournemouth are without an away win for the past 9 matches in the league. Who knows how long it might last, too.

Looking over their past head to head meetings going back to 04/02/2017 shows that Everton have won 3 of these & Bournemouth 2, with the tally of drawn results standing at 1.

A lot of goals were also scored during this period, 25 in total at an average of 4.17 goals per match.

Due to a completely injury-free group ready to go, Bournemouth manager Eddie Howe has zero fitness concerns to speak of before this game.

Our feeling is that Bournemouth and Everton may both struggle to make a breakthrough here.

At this stage, it appears to have the makings of a possible draw. We’re therefore tipping a very competitive game with a 0-0 scoreline after 90 minutes.

Over/Under 2.5 Goals Prediction for Everton vs Bournemouth
Under 2.5 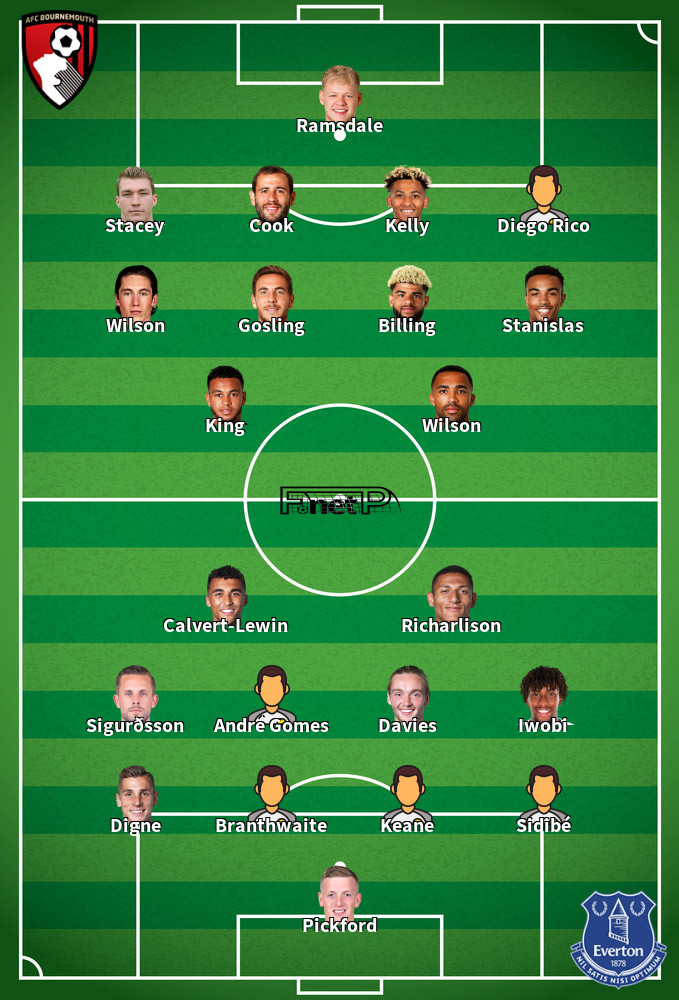 Mostly taking up the Striker position, Dominic Calvert-Lewin was born in Sheffield, England. After having made a senior debut playing for Sheffield United in the 2014 - 2015 season, the talented Forward has hit 13 league goals in the Premier League 2019 - 2020 campaign so far in 35 appearances.

We have made these Everton v Bournemouth predictions for this match preview with the best intentions, but no profits are guaranteed. Please always gamble responsibly, only with money that you can afford to lose. Best of luck with your selections.