Cardiff City arrive at John Smith's Stadium on Saturday for the Championship showdown with home side Huddersfield.

View all Huddersfield Town v Cardiff City tips, stats and our pre-match poll below - plus the latest match odds.

Huddersfield will be looking for a repeat result of a 1-0 Championship triumph over Cardiff City.

Coming into this fixture, Huddersfield Town have not won at home in their last 3 league matches.

It is worth noting that Cardiff City have had real problems scoring goals in their past six encounters, netting the disappointing return of just 4. In those fixtures, The Bluebirds have also seen the collective goal tally of opposing teams equal 8. Still, we’ll just have to find out whether that pattern shall be replicated in this match.

Ahead of this clash, Cardiff City have left without a victory over Huddersfield Town when they've played them away from home in the last 2 league matches.

Looking over their prior head-to-head clashes stretching back to 21/08/2019 shows us that Huddersfield have won 1 of these games & Cardiff City 4, with the tally of drawn matches being 1.

A sum of 15 goals were shared by the two clubs in this period, with 4 for The Terriers and 11 belonging to The Bluebirds. The average goals per game has been 2.5.

The last league meeting featuring these sides was Championship match day 11 on 17/09/2022 which ended up with the score at Huddersfield Town 1-0 Cardiff City.

On that day, Huddersfield Town had 44% possession and 2 shots on goal with 2 on target. Their only player to score was Jordan Rhodes (9').

For their opponents, Cardiff City had 2 shots at goal with 0 of them on target.

It doesn’t get much better regarding selection, with just the sole fitness concern for the Huddersfield manager to be concerned with from a near full-strength group. Tyreece Simpson (Knee Injury) will miss out.

Owing to an otherwise healthy group of players, there is only the one fitness problem for the Cardiff City gaffer Steve Morison to contend with. Jamilu Collins (Cruciate Ligament Injury) won’t be in action.

In our opinion, Cardiff City and Huddersfield Town may well end up cancelling each other out here.

A close call, and we think a draw is quite likely. We’re therefore predicting a very close game with a 1-1 score draw at the end of the 90. 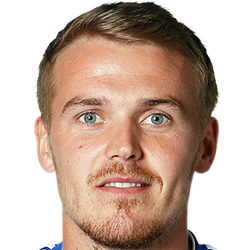 Customarily taking up the Striker position, Danny Ward was born in Bradford, England. After having played his first senior match for Bolton Wanderers in the 2009 - 2010 season, the talented Forward has netted 2 league goals in this Championship 2022 - 2023 campaign to date in 7 appearances.

While we have made these predictions for Huddersfield Town v Cardiff City for this match preview with the best of intentions, no profits are guaranteed. Always gamble responsibly, and with what you can afford to lose. We wish you the best of luck.