Cremonese will be taking on visiting club Pordenone at Stadio Giovanni Zini in the Serie B game on Saturday.

Our predictions, user poll and statistics for Cremonese v Pordenone can be found here - as well as up-to-date odds.

Cremonese fans will want a repeat of their previous result, being a 0-1 Serie B triumph versus Cosenza.

Their more recent scorelines show that not much more can be done by the Cremonese rearguard. Grigiorossi have given the opposition little, resulting in the number of goals that have gone in at their end over the course of their past 6 clashes standing at 4. We will have to see if that trend will end up being continued on into this next match.

Going into this one, Cremonese haven't lost in the league to Pordenone in their last 2 games.

Pordenone will come into the clash following a 3-0 Serie B win as they beat Entella in their last game.

In that game, Pordenone had 45% possession and 9 shots on goal with 5 on target. For Pordenone, the goalscorers were Patrick Ciurria (4'), Sebastian Musiolik (31') and Karlo Butić (90'). Entella had 11 shots at goal with 1 on target.

It is worth noting that Pordenone have failed to get amongst the goals in their past six encounters, contributing the poor return of only 4. In those matches, Ramarri del Noncello have also seen the overall goal aggregate of their opponents equal 10.

Coming into this contest, Pordenone are without a win away from home in their last 5 league matches.

The previous league contest between these clubs was Serie B match day 14 on 22/12/2020 when it finished Pordenone 1-2 Cremonese.

In that game, Pordenone had 53% possession and 20 attempts on goal with 3 of them on target. Their only player to score was Nicola Falasco (69').

The match was refereed by Ivan Robilotta.

We feel that over the course of the game, Pordenone will have their work cut out to break down this Cremonese side who we think should do enough to score at the other end and edge ahead.

Our tip is therefore for a hard-fought 1-0 win for Cremonese when the referee blows for full-time. 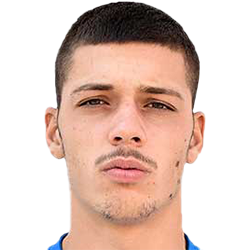 Usually played in the Central Attacking Midfielder position, Gianluca Gaetano was born in Cimitile, Italy. Having made a first senior appearance for SSC Napoli in the 2018 - 2019 season, the gifted Midfielder has managed to score 4 league goals in the Serie B 2020 - 2021 season so far in a total of 27 appearances.

We have made these Cremonese v Pordenone predictions for this match preview with the best intentions, but no profits are guaranteed. Please always gamble responsibly, only with money that you can afford to lose. We wish you the best of luck.