Cremonese will arrive at Stadio Arechi on Monday for the Serie B fixture with home team Salernitana.

Our Salernitana v Cremonese predictions, statistics and match poll can be seen below - as well as the best betting odds.

Salernitana will be hoping to return to winning ways here after a 2-0 Serie B defeat in their last game at the hands of SPAL.

It’s been all too rare in recent games that Salernitana have kept a clean sheet. It will be a concern for them that I granata have been scored against in 5 of their previous 6 matches, shipping 6 goals on the way. Such a pattern isn’t assured to follow through into this next game, however.

Coming into this fixture, Salernitana have not beaten Cremonese in their last 2 matches in the league.

Following on from being defeated in their last game at the hands of Vicenza in Serie B action, Cremonese will be aiming to make amends here.

In that game, Cremonese managed 57% possession and 10 attempts at goal with 1 on target. On the other side, Vicenza had 14 attempts on goal with 3 of them on target. Emanuele Padella (84') was the scorer for Vicenza.

It is worth noting that Cremonese have suffered from a shortage of goals over their last six encounters, netting the poor return of only 3. In those matches, Grigiorossi have also seen the overall goal tally of their opponents equal 6.

Going into this contest, Cremonese are without a win away from home in their last 3 league matches.

If we look at their past head to head duels stretching back to 19/11/2017, there has been little between the sides with Salernitana winning 1 of those games, Cremonese 1 and 4 being draws in regulation time.

An aggregate of 13 goals were shared by the two clubs in these games, with 7 from I granata and 6 coming from Grigiorossi. The average goals per game has been 2.17.

The previous league match between these clubs was Serie B match day 31 on 29/06/2020 which finished with the scoreline of Salernitana 3-3 Cremonese.

The referee was Niccolò Baroni.

Salernitana manager Fabrizio Castori has a full complement, with no fitness worries at all before this clash thanks to a completely injury-free squad to pick from.

With a completely healthy group available for selection, Cremonese boss Pierpaolo Bisoli does not have any fitness concerns whatsoever before this game.

Looking at these two teams, we feel that Cremonese are certainly able to put one past this Salernitana lineup, but that probably shouldn’t prevent them from conceding a couple at the other end.

Our selection here is for a narrow 2-1 winning margin for Salernitana when the full-time whistle blows. It should be a decent one. 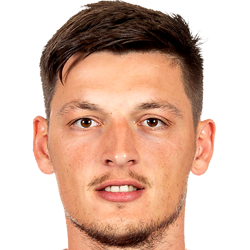 Mostly deployed in the Striker position, Milan Đurić was born in Tuzla, Bosnia and Herzegovina. Having made a first senior appearance for Cesena in the 2007 - 2008 season, the accomplished Forward has struck 2 league goals in this Serie B 2020 - 2021 season to date from a total of 6 appearances.

We have made these Salernitana v Cremonese predictions for this match preview with the best intentions, but no profits are guaranteed. Please always gamble responsibly, only with money that you can afford to lose. Good luck if you do place a bet today.