Ternana host visiting team Crotone at Stadio Libero Liberati in this Serie B meeting on Monday.

For all of our match predictions, pre-game poll and statistics for Ternana v Crotone, scroll down (including the best match odds).

Ternana will play in this match coming off the back of a 3-3 Serie B drawn match versus Lecce.

Matches featuring Ternana have tended to be absorbing affairs recently with plenty of scoring anticipated. Over their past half dozen games, the sum of 22 goals have gone in for both teams combined (at an average of 3.67 goals per game) with 13 of these being chalked up by Ternana.

Looking at their past form shows that Ternana:

Since being defeated in their last game at the hands of Vicenza in Serie B action, Crotone will be hoping to turn things around here.

In that match, Crotone managed 65% possession and 12 shots at goal with 2 on target. Vicenza got 17 attempts on goal with 6 on target. Stefano Giacomelli (66') scored for Vicenza.

Looking at their form, and Crotone have been scored against in 6 of their last 6 games, with opponents netting 9 goals in total. Defensively, Crotone seem to have a bit of a soft underbelly. Historical results aside, we will just have to wait and see whether such a trend will be maintained in this upcoming match.

Ahead of this meeting, Crotone have not won away from home in their last 8 league matches. Very poor, indeed.

Looking at their past head-to-head meetings stretching back to 26/10/2013 shows that Ternana have won 2 of them and Crotone 3, with the number of drawn results standing at 1.

A combined sum of 18 goals were produced between them in these games, with 8 of them from Ternana and 10 created by Crotone. That is an average goals per game value of 3.

The previous league contest between these sides was Serie B match day 35 on 09/04/2016 which ended up with the score at Ternana 1-2 Crotone.

The referee was Francesco Paolo Saia.

The Ternana boss Cristiano Lucarelli will be happy not to have any fitness concerns whatsoever ahead of this clash with a fully injury-free squad to choose from.

With a fully healthy group available for selection, the Crotone boss Pasquale Marino has zero fitness worries to speak of before this match.

In our view, Crotone will manage to break down this Ternana team, but it might not be as many as they will have scored against them.

Our tip is for a 2-1 win for Ternana at the end of the 90 minutes. Hopefully this is a good one. 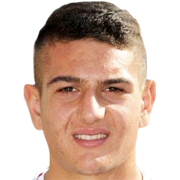 Typically used in the Right Wing position, Anthony Partipilo was born in Bari, Italy. After having made a senior debut playing for AS Bari in the 2012 - 2013 season, the dangerous Forward has contributed 3 league goals in the Serie B 2021 - 2022 campaign so far in a total of 11 appearances.

We have made these Ternana v Crotone predictions for this match preview with the best intentions, but no profits are guaranteed. Please always gamble responsibly, only with money that you can afford to lose.