Cuiabá head to Estádio do Maracanã on Sunday for the Serie A meeting with home team Flamengo.

Our full set of predictions, statistics and match poll for Flamengo v Cuiabá can be seen below - plus the latest betting odds.

Flamengo are hoping to win again after their last result, the 3-1 Serie A victory over Juventude.

Their latest results shine a light on the fact that there has been much resilience in the Flamengo defence. Flamengo have been miserly, resulting in the tally of goals that have flown into the back of their net over the course of their past six clashes standing at 3. We shall soon see whether or not that trend will be continued on in this game.

Cuiabá will go into the clash after a 1-0 Serie A win with the downing of Sport Recife in their last match.

In that match, Cuiabá had 55% possession and 16 attempts at goal with 8 on target. The scorer for Cuiabá was Élton (69'). Sport Recife got 12 shots on goal with 3 of them on target.

Jorge Jorginho's Cuiabá have fired home a total of 5 times in the course of their latest 6 matches. The overall goals that have been scored against them during the equivalent period adds up to 6.

The previous league encounter between the two was Serie A match day 8 on 01/07/2021 when it ended Cuiabá 0-2 Flamengo.

That day, Cuiabá had 44% possession and 9 shots on goal with 2 of them on target.

The match was refereed by Rodolpho Toski Marques.

Almost everyone can be considered, as there’s just a single fitness concern for the Flamengo gaffer Renato Portaluppi to be concerned about thanks to an almost full-strength group. Giorgian de Arrascaeta (Muscle Injury) won’t play.

Thanks to a completely healthy squad available for selection, the Cuiabá manager Jorge Jorginho has zero fitness concerns at all coming into this match.

It’s looking like Cuiabá won’t find it easy at all to break down a Flamengo outfit who have the quality to win well here.

We are predicting a 3-0 winning scoreline for Flamengo by the conclusion of the match. 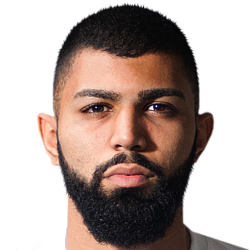 Mostly taking to the field in the Striker position, Gabriel Barbosa was born in São Bernardo do Campo, Brazil. After having played his first senior match for Santos in the 2013 season, the goalscoring Forward has managed to score 6 league goals in this Série A 2021 campaign so far in a total of 8 appearances.

While we have made these predictions for Flamengo v Cuiabá for this match preview with the best of intentions, no profits are guaranteed. Always gamble responsibly, and with what you can afford to lose. Good luck if you do place a bet today.