Derry City journey to UCD Bowl on Friday for the Premier Division fixture with hosts UCD.

To see all of our predictions, user poll & stats for UCD v Derry City, scroll down (inc. the best betting odds).

UCD will be looking for an improved result here following a 2-1 Premier Division losing effort in their last game against St. Patrick's Athletic.

It has not been often in recent times that UCD have kept a clean sheet. In fact, UCD have been scored against in 5 of their previous 6 clashes, shipping 10 goals in the process. We will have to see whether or not that trend will end up being continued on in this game.

A look at their previous results shows us that UCD:

The only player to score from Derry City was Matty Smith (33'). Dean Williams (78') scored for Drogheda United.

An examination of past results between these clubs stretching back to 15/02/2019 shows that these fixtures have been a source of anguish for UCD. They’ve not managed to register any victories whatsoever whereas Derry City have managed to find a way, finishing as winners in 83 per cent of those matches.

19 goals were shared by the two clubs throughout the course of those matches, with 2 from The Students and 17 for The Candystripes. The average goals per game has been 3.17.

The previous league match featuring the two was Premier Division match day 12 on 22/04/2022 and the score finished Derry City 7-1 UCD.

The referee was Ben Connolly.

The UCD boss Andy Myler does not have any fitness concerns whatsoever ahead of this game with a completely healthy squad available for selection.

From a largely full-strength group of players, there’s only a single fitness issue for the Derry City boss Ruaidhrí Higgins to be concerned with. Michael Duffy (Tibia Fracture) won’t be playing here.

We are inclined to think that The Candystripes could decide to begin the game with a 3-5-2 lineup with a starting lineup of Brian Maher, Cameron Dummigan, Cameron McJannett, Shane McEleney, Caoimhin Porter, Patrick McEleney, Brandon Kavanagh, Will Patching, Ciarán Coll, Jamie McGonigle and Matthew Smith.

We envisage that Derry City should fashion enough chances to find the net more than once while not conceding when they come up against UCD, who could well struggle to score.

Accordingly, we see a routine 0-2 win for Derry City after 90 minutes. 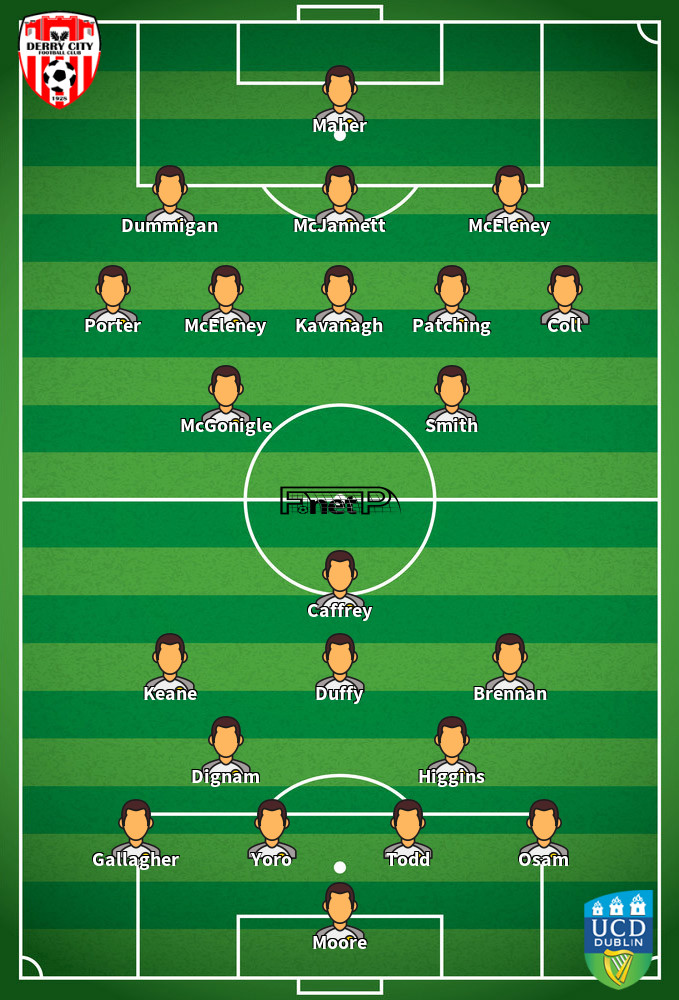 Regularly playing in the Central Attacking Midfielder position, Liam Kerrigan was born in Sligo, Rep. Ireland. After making a first senior appearance for Sligo Rovers in the 2018 season, the skilful Midfielder has got 2 league goals in this Premier Division 2022 campaign to date from a total of 18 appearances.

While we have made these predictions for UCD v Derry City for this match preview with the best of intentions, no profits are guaranteed. Always gamble responsibly, and with what you can afford to lose. Good luck with your selections.