Gorica will be visiting Stadion Maksimir on Saturday for the Prva Liga game with home side Dinamo Zagreb.

Our tips, poll and stats for Dinamo Zagreb v Gorica can all be found here - as well as up-to-date odds.

Dinamo Zagreb, buoyed by their previous result, will be hoping for more of the same after the 2-7 Prva Liga triumph over Rijeka.

In their last fixture, Gorica drew 0-0 in the Prva Liga tie with Varaždin.

It is worth noting that Gorica have failed to get amongst the goals over their last six encounters, recording the unsatisfactory return of only 3. In those fixtures, Gorica have also seen the collective goal aggregate of their opponents equal 8. That sort of trend isn’t assured to be carried forward into this game, of course.

Coming into this meeting, Gorica haven’t won away from home in the past 8 league matches. Who knows how long it might last, too.

Checking on their past head to head results stretching back to 16/05/2021 tells us that these fixtures have not been kind to Gorica. They have not been able to come away with any victories whatsoever whereas Dinamo Zagreb have simply been better than them, getting wins in 100% of those games where they have faced each other.

A combined total of 11 goals were yielded between them in these games, with 10 for Plavi and 1 being from Gorica. That’s an average goals per game figure of 1.83.

The previous league meeting between these sides was Prva Liga match day 9 on 10/09/2022 which finished with the scoreline of Gorica 0-1 Dinamo Zagreb.

That day, Gorica had 37% possession and 8 attempts on goal with 3 of them on target.

Dinamo Zagreb got 4 attempts on goal with 3 of them on target. Mislav Oršić (93') was the scorer.

The match was refereed by Zdenko Lovrić.

The Dinamo Zagreb manager Ante Čačić has no fitness concerns at all coming into this game with a completely healthy group to pick from.

Thanks to a completely injury-free group available for selection, the Gorica boss Željko Sopić doesn’t have any fitness concerns whatsoever ahead of this match.

One thing is for certain, Gorica could really find it hard to be scoring even one goal against a Dinamo Zagreb team who appear set to really run this game.

We can see a commanding 3-0 victory for Dinamo Zagreb at the end of the 90 minutes. 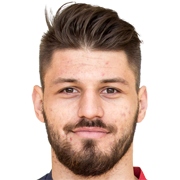 Regularly taking up the Striker position, Bruno Petković was born in Croatia. After making a first senior appearance for Catania in the 2012 - 2013 season, the dangerous Forward has got 8 league goals in this HNL 2022 - 2023 campaign to date coming from a total of 15 appearances.

We have made these Dinamo Zagreb v Gorica predictions for this match preview with the best intentions, but no profits are guaranteed. Please always gamble responsibly, only with money that you can afford to lose. Good luck with your selections.