Shamrock Rovers will be visiting Oriel Park on Friday for the Premier Division fixture with hosts Dundalk.

Our Dundalk v Shamrock Rovers predictions, statistics and match poll can be seen below - as well as the best betting odds.

Dundalk will be looking for a repeat result of the 1-0 Premier Division success versus St. Patrick's Athletic.

The only scorer from Dundalk was Daniel Kelly (24').

Dundalk haven’t had any problems with scoring, netting in one hundred percent of their last 6 matches.

They have managed to rack up 13 during that period and have conceded a total of 5.

Shamrock Rovers come into this meeting after a 2-0 Premier Division win in the defeat of Shelbourne in their most recent match.

For Shamrock Rovers, the goalscorers were Richie Towell (2') and Rory Gaffney (31').

A series of resolute performances by the Shamrock Rovers defensive players has resulted in their ‘goals against’ tally standing at 3 from their past 6 outings in total. Over that same period, the number of goals that they have scored themselves is 12. That kind of pattern isn’t assured to be sustained here, of course.

Looking over their past head to head clashes dating back to 02/04/2021 shows us that Dundalk have won 2 of them and Shamrock Rovers 3, with the number of draws being 1.

A sum of 12 goals were produced between them in these games, with 5 of them for The Lilywhites and 7 created by The Hoops. That’s an average goals per game figure of 2.

The last league contest featuring the two was Premier Division match day 11 on 18/04/2022 and the score finished Shamrock Rovers 1-0 Dundalk.

The match was refereed by Raymond Matthews.

Availability isn’t a big problem, with just one fitness concern for the Dundalk gaffer Stephen O'Donnell to contend with due to a largely intact group. John Mountney (Cruciate Ligament Injury) won’t play.

Thanks to a completely healthy squad to pick from, the Shamrock Rovers boss Stephen Bradley does not have any fitness worries at all ahead of this match.

We think that Dundalk might well have a job on their hands to put one past this Shamrock Rovers lineup who we think should score one, at least.

We’re therefore tipping a highly competitive game with a 0-1 win for Shamrock Rovers at the end of this game. 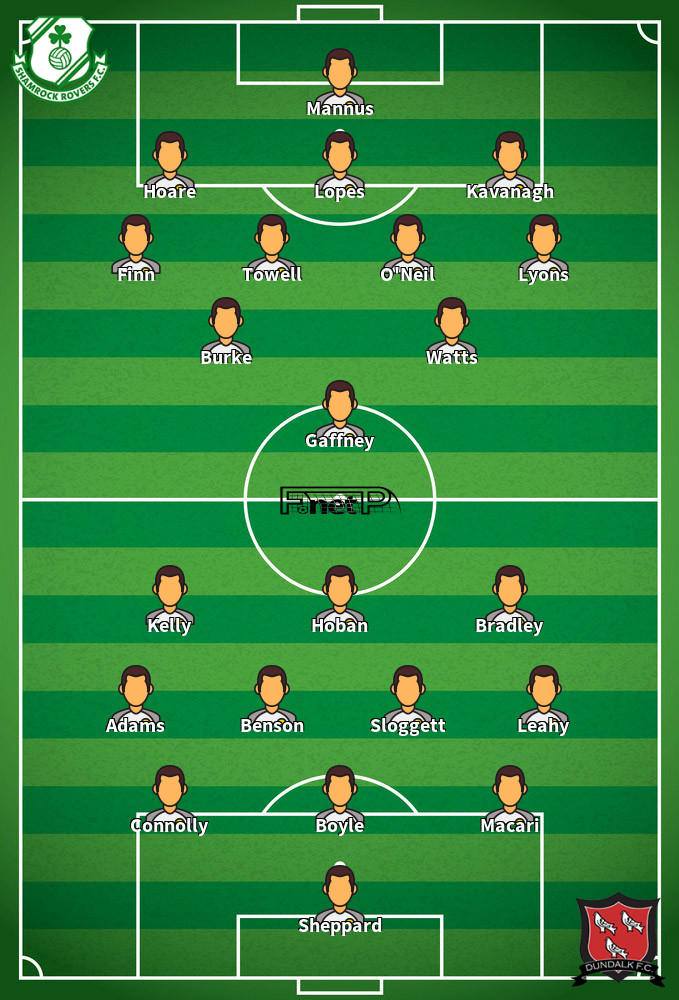 Usually played in the Right Attacking Midfielder position, Daniel Kelly was born in Rep. Ireland. Having made a first senior appearance for Bray Wanderers in the 2018 season, the dangerous Midfielder has hit 5 league goals in this Premier Division 2022 season so far from a total of 16 appearances.

While we have made these predictions for Dundalk v Shamrock Rovers for this match preview with the best of intentions, no profits are guaranteed. Always gamble responsibly, and with what you can afford to lose. Good luck if you do place a bet today.